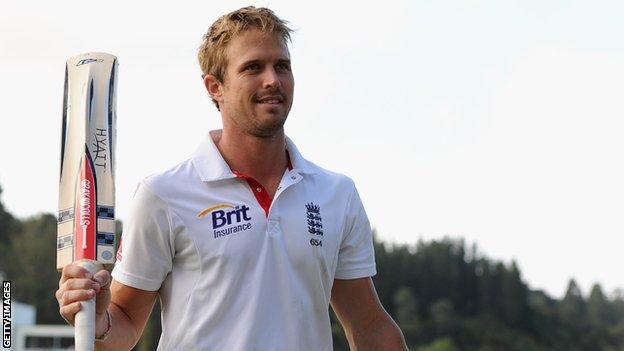 Nick Compton fully deserved his maiden Test century on the fourth day of the opening Test against New Zealand and his brilliant performance means there will be no talk of Joe Root going up the order for a while.

For Compton - on a pair, and with all the speculation about his future in the side - to go out there and hit a hundred says everything about his temperament, determination, character and composure.

He didn't give New Zealand a chance. He was a bit harum-scarum in the 90s, and made one or two risky runs that startled his captain and opening partner Alastair Cook, but he fully deserved his ton.

Now Compton knows he can score runs at this level and hopefully it will relax him a little because sometimes he looks tense out in the middle.

"Nick Compton came into this match with questions about his Test future hanging over him and he has had a great day. When you have lows you're entitled to highs and today is his day - he can go home and rejoice. It is one of the most memorable days of his life."

An encouraging fourth day was exactly what England needed in Dunedin. I do not think anybody was expecting a fightback quite as dramatic as that, with a record opening stand from Cook and Compton, but it has given England the perfect platform.

Their display followed on the back of a real thrashing earlier when New Zealand added 58 runs in 8.4 overs in the morning session.

It looked awful for England and there were dropping heads and flaring tempers. It is not often that you can turn things around after a start to a day like that, but they managed to - and that's full credit to Cook and Compton.

Cook scored his fourth century in five Tests this winter - he is just an extraordinary man. Usually a batsman's form falters when he becomes captain, although that is certainly not the case with him. It is his sixth ton in seven Tests as captain.

He will be honest enough to know that both he and Compton were a little awkward to start with and their footwork was not quite what it might have been. But suddenly you can tell when Cook is in nick - it is like someone flicking a switch. The footwork started and from that moment the ball hardly beat his bat.

We should remember, though, that only half the job has been done, and that is what England will be saying overnight.

They must bat until tea on the final day and their perfect objective would be to bat until within an hour of the close before making the statement of sticking New Zealand in to bat again.

They will say 'keep going' to Compton and look to carry on through with unglamorous batting and show the determination needed to save the game.

It is an extended day - there are 98 overs - and they are going to have to fight.

No-one knows what the conditions will be like; it might be overcast and the ball might nip around. It is hard to forecast in this part of the world.

Only one team can win this game and that is New Zealand, but if England can come out of it with a draw, they will feel they are ahead on points.

It is often the team which have dominated the game throughout that takes a bit of a blow in the solar plexus when they cannot finish it off.

If England can pull the game out of the fire they will go in to Wellington and Auckland with the psychological advantage.