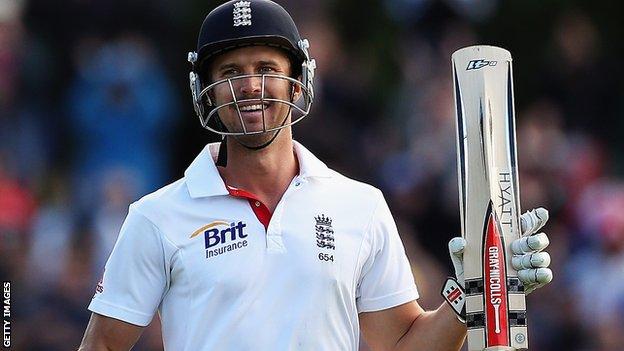 Nick Compton scored his first Test century and Alastair Cook his 24th as England fought back brilliantly in the opening Test against New Zealand.

Captain Cook fell for 116 late on but Compton's unbeaten 102 leaves England well-placed to save the game.

"For Compton - on a pair, and with all the speculation about his future in the side - to go out there and hit a hundred says everything about his character and composure."

He was largely responsible for the hosts adding 58 in 8.4 riotous overs at the start of the day, and New Zealand's dominance was such that they could reasonably have harboured hopes of an innings victory.

However, Cook and Compton batted with the sort of application that was sorely lacking in England's first innings to convert a position of considerable peril into one which should ensure the sides head to Wellington for the second Test level.

They spent 84 overs together, 29 more than the entire team managed on the second day, highlighting the docile nature of the pitch as well as the limitations of the home attack.

Their partnership, finally broken three overs before the close, was England's highest ever opening stand against New Zealand.

Compton's innings was all the more impressive given that it was constructed on the back of a first-innings duck.

It also served as a timely response to those who questioned his place at the top of the order.

After two failures in England's only warm-up game in New Zealand, and a Test series in India in which his highest score from eight innings was 57, Compton was under pressure to perform.

Although nervous early on and again as his century approached - he spent 50 minutes in the 90s - he showed great composure and a solid technique to graft his way to a 259-ball ton in only his fifth Test.

A run-out scare on 94, when a Bruce Martin direct hit would have left him short, was the only chance he offered during almost six hours at the crease.

Compton's achievement will overshadow that of Cook, but the skipper can be mightily pleased with his own contribution to a fightback that bore all the hallmarks of England's recovery in Brisbane in the first Ashes Test against Australia in 2010-11.

There was little to separate Cook and Compton for the majority of the day, both eschewing risk in favour of stout defence, particularly during an afternoon session that yielded only 77 runs in 32 overs and tested the patience of the spectators as much as New Zealand's bowlers.

Cook was first to a century, his sixth in seven Tests as captain. He also became only the third Englishman after Michael Vaughan and Ian Bell to score hundreds against all of the other eight Test-playing nations.

Graeme Fowler and Chris Tavaré's 223-run opening stand against New Zealand at The Oval in 1983 had been usurped by the time Cook was caught behind, fencing at a Trent Boult outswinger with the second new ball.

"Could England bat better? Could they bat differently? Were they up for it? Well, they were - and they played without much trouble. The pitch has played well and it has pulled the fangs off all of the bowlers."

It was a rare blemish on a magnificent England batting display, the controlled nature of which was a far cry from the explosive start New Zealand made to the day.

A lead worth 235 overnight allowed McCullum - resuming on 44 - the ideal platform to attack, to the tune of three sixes off the first 10 balls he faced.

Stuart Broad and James Anderson were treated disdainfully, and number nine Bruce Martin also joined in the fun as the crowd's enjoyment grew in proportion to England's obvious frustration.

McCullum had scored all but 20 of his 74 runs in boundaries when, chasing another, he provided Anderson with a steepling catch at midwicket off Broad.

Steven Finn needed just four deliveries to have Martin, who made 41 to complement his first-innings figures of 4-43, caught behind on the pull to prompt New Zealand's declaration.