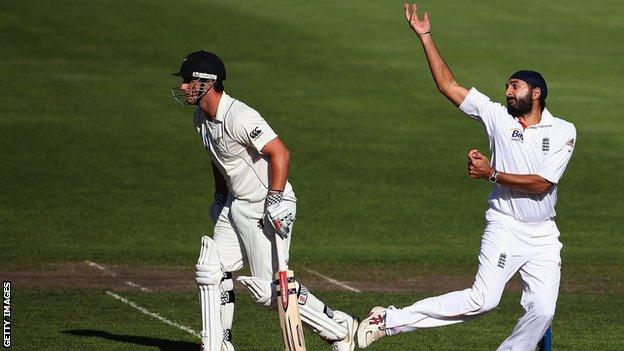 Left-arm spinner Monty Panesar has been awarded an incremental England contract for 2012-13.

The Sussex bowler, 30, qualifies for a new contract after playing three Test matches against India, as well as the current Test with New Zealand.

Selector Geoff Miller said: "This award reflects the contribution Monty's made to the Test team during the winter."

Panesar was wicketless in eight overs against the Kiwis after the second day of the first Test in Dunedin.

He made his Test debut against India in March 2006 and was handed a full central contract later that year, before being dropped from the ranks of contracted England players in September 2009.

Panesar has taken 159 wickets in 45 Tests and 24 wickets in 26 one-day internationals, and earned the new deal by gaining 20 points during the 12-month contract period.

Five points are awarded for a Test appearance and two for a Twenty20 or one-day international appearance.