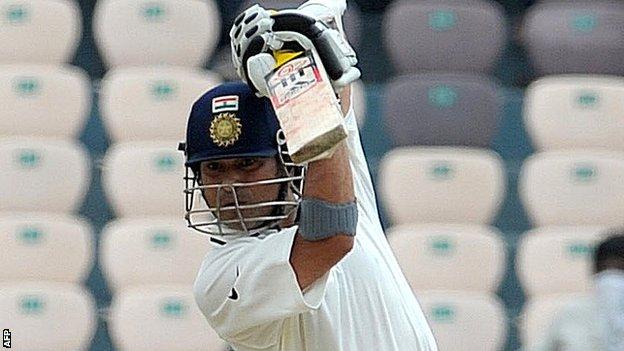 India needed less than a session on the final day of the first Test to complete an eight-wicket victory over Australia.

The Australians resumed 40 ahead with their final wicket pair at the crease and added nine in as many overs before last man Nathan Lyon fell for 11.

Debutant Moises Henriques was stranded on 81 and India's target was only 50.

They lost both openers but Sachin Tendulkar hit his first two balls for six as India took a 1-0 lead into the second Test which starts on Saturday.

The pitch looked a lot worse than it played. No excuses, we got outplayed.

Henriques made 68 in the first innings and after some clean hitting late on day four there were faint hopes a maiden Test century could pose an awkward target for the home team.

His partner Lyon was becoming increasingly confident in his ability to keep out the spinners and chose to take a single off the final ball of a Ravichandran Ashwin over to retain the strike against Ravi Jadeja.

But the left-arm spinner dismissed him with a quicker ball that generated some extra bounce and took the inside edge onto the pad and gave a catch to Murali Vijay at short-leg, which meant spinners had taken all 20 wickets for India for only the third time in a Test match.

India had gone with spin from both ends at the start of Australia's second innings but the tourists chose their new fast bowling hope James Pattinson to take the new ball.

He was partnered at the other end by the spin of Lyon, however, but Murali wasted no time playing himself in, getting off the mark by coming down the wicket to thump a flat six down the ground.

Pattinson claimed his sixth wicket of the match in the next over though as Murali was superbly caught by the impressive Henriques at mid-off.

Virender Sehwag had lashed two fours from wayward deliveries by Pattinson, but after adding a delightful third boundary with a straight drive off Peter Siddle he was caught at slip with a rare defensive prod against Lyon.

There were 14 needed when Tendulkar, Test cricket's record run-scorer, walked out at number four to a typically feverish reception.

The fielders were crowded round the bat but any thoughts of quietly eking out the runs were soon dispelled when Tendulkar dispatched a length ball outside off-stump over long-on for six.

Remarkably he repeated the shot to the next delivery to send the crowd into a frenzy.

They were hoping for a third Tendulkar maximum to end the match but that came in comparatively tame fashion in the 12th over with a single when Cheteshwar Pujara edged Lyon and wicketkeeper Matthew Wade was unable to take the chance.

Australia have now gone eight Tests without a victory in India, losing the last two series without a win, and they head to Hyderabad knowing improvement is needed to get back into this four-match series.

Skipper Michael Clarke refused to blame the crumbling surface for his team's defeat and said: "The pitch looked a lot worse than it played.

"Second innings, it played tougher, but that's what you expect in the sub-continent. No excuses, we got outplayed.

"Moises' debut is a positive, but we have got to turn things around, work hard in the nets and get ready for the next Test match."

Dhoni, who made a superb 224 in India's first innings 572, said: "I never dreamt I would get a double in Tests. I had never even dreamt of playing for the country.

"It's important to be focused now, but at the same time it is important that the bowlers take some time off."