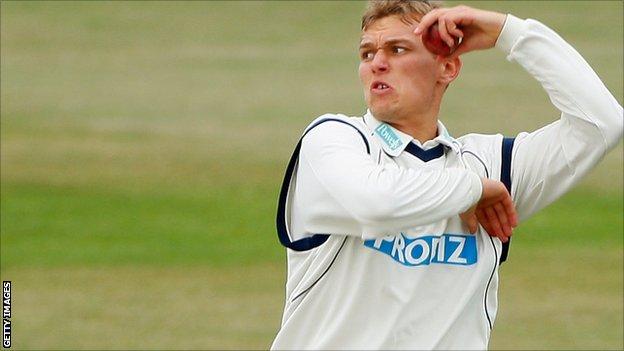 Hampshire's Danny Briggs says he will be fit for the start of the season after injury forced him out of the recent T20 series in New Zealand and England Lions tour of Australia.

Spinner Briggs injured an ankle while training during England's one-day series in India before Christmas.

But he says he will be fit for Hants' trip to Barbados in three weeks time.

"I've been doing a lot of strengthening work - it should be timed well for the Barbados tour and season," said Briggs.

I just need to play as much cricket as possible with Hampshire, and if I play well then I know I will be playing all three forms consistently

Meanwhile, Briggs has committed his immediate future to the county, despite having played limited first-class cricket in 2012.

The 21-year-old from the Isle of Wight was a pivotal figure in Hampshire's T20 and CB40 cup double - form which led to an England call-up for the World T20, only for the ankle injury to cut short his winter tour.

And Briggs says that despite only playing four Championship games for Hampshire last season, he does not expect another season of Division Two cricket to harm his international prospects.

"I love it at Hampshire and it is a great place to be," Briggs told BBC Radio Solent.

"We had a great year. And I just need to play as much cricket as possible with Hampshire, and if I play well then I know I will be playing all three forms consistently.

"I've had a lot of success in one-day and T20 cricket but I want to be a consistent bowler in all-three forms and bring my four-day game on."

However, Briggs, who was last season a regular member of England's limited-overs squads, admits he is worried that his lack of first-class cricket could hamper his hopes of playing for England.

"Obviously it's a concern," he said. "For me personally, I just want to play every game.

"I had a fairly good start in four-day cricket and I want to try and carry that on. I missed it last year not playing as much. As for England, they want to see me playing consistently for your county.

"I want to get back to playing with Hampshire and perform as well as I can for them and get myself back in contention."