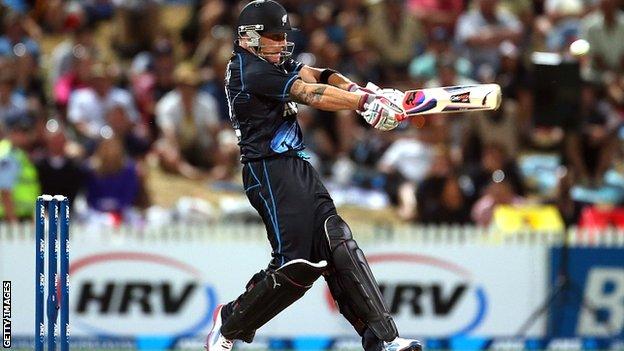 New Zealand took the lead in the three-match one-day series after beating England by three wickets in Hamilton.

Put in, England's Ian Bell, Jonathan Trott and Joe Root made fifties but the last six wickets fell for 38 in six overs and they were all out for 258.

Kane Williamson kept New Zealand in contention with an assured 74.

Brendon McCullum fired 69, sharing 41 in three overs with Martin Guptill (27) who returned after retiring hurt as the Kiwis won with seven balls to spare.

After three one-sided matches in the Twenty20 series won by England, the opening 50-over international was an intriguing contest in which both teams faltered after solid starts.

"That was a very impressive win, England's bowling plans were odd, they haven't bowled much in these conditions, they've been used to the sub-continent, but there was a lot of short stuff flying around.

"It is difficult with these new field restrictions but New Zealand played really well."

England's victorious run chase in Wellington on Friday saw openers Michael Lumb and Alex Hales reach their target of 140 in 12.4 overs, and batting first on a tranquil afternoon at Seddon Park was always likely to be rather more somnolent.

Neither Lumb nor Hales are part of the 50-over set-up, and England's conventional top three were all playing their first innings of the tour.

Skipper Alastair Cook was bowled through the gate by chiseled left-arm seamer and part-time model/TV extra Mitchell McClenaghan in the fourth over but Ian Bell, dropped on 26, played some typically attractive strokes.

He reached his 25th ODI half century in 67 balls with an elegant straight drive for six, sharing 84 in 20 overs with Trott, whose last innings for England was in the India Test series two months ago.

Trott hit only two fours from his first 66 balls but added three in his next eight deliveries to reach his 19th ODI fifty before he was bowled off the inside edge backing away.

Although a platform had been set, almost 39 overs had elapsed by the time Eoin Morgan arrived at number five, with the run rate around 4.7.

The left-hander was superbly caught low at backward point for only a single but the methodical Root impressed again, combining authentic strokes with the occasional innovative scoop to reach a half century from 57 balls, his second ODI fifty in only his sixth match.

Jos Buttler hit two sixes, one remarkable pull shot soaring over long on into the first aid enclosure, but England lost their final four wickets in as many overs, McClenaghan, a bachelor of commerce in marketing and accounting also on his CV, recording his second four-wicket haul in only his fourth international, before leaving the field with a side strain.

Concerns of a low total soon dissipated when James Anderson struck in the first over of the New Zealand reply, the floodlights in operation despite bright sunshine from a delightful clear sky.

In his first match since the India Test series, the 30-year-old Lancastrian surpassed Sir Ian Botham's record as England's leading international wicket-taker when he swung one back through the defences of BJ Watling.

Problems quickly escalated for the home side when Guptill strained a hamstring on three and with the new laws banning the use of a runner he was unable to continue, but the well-organised Williamson drove authoritatively, with smooth timing.

He shared 73 with Ross Taylor (22) before the former captain hooked the final ball of the 20th over to fine-leg.

Williamson added 49 with Grant Elliott (22), who was struck on the visor by a Stuart Broad bouncer and drove the next ball he faced straight to backward point to give Chris Woakes a second wicket, bringing skipper McCullum to the crease with 135 needed from 20.3 overs.

With the required rate in excess of seven per over and McCullum struggling to find his range under the lights, Williamson was run out as Woakes superbly collected a low return and took the bails off in one movement.

McCullum pulled Anderson into the crowd and added two fours from the next two balls, while brother Nathan dispatched Graeme Swann into the sponsors' tent, before he became the sixth wicket to fall, to leave a requirement of 73 from 54.

The captain reached his 23rd half century from 48 balls and survived a chance to Trott in the outfield.

As England's bowlers persisted with the short ball, McCullum and Guptill cut loose against Steven Finn, Woakes and Broad as the Kiwis, who had lost 11 of their last 14 matches, recorded their fifth successive ODI win against England.