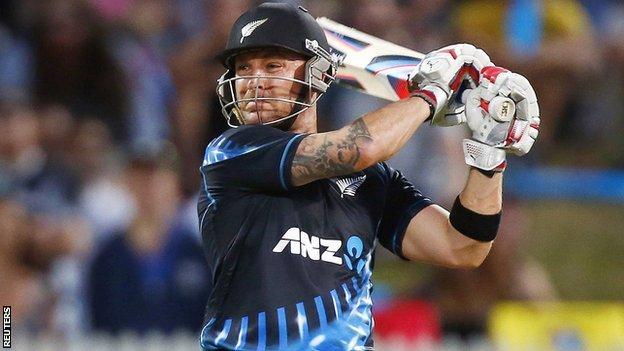 England were outclassed in Hamilton as New Zealand wrapped up a 55-run win to level the three-match Twenty20 international series at 1-1.

Martin Guptill (47) and Hamish Rutherford (40) added 75 for the first wicket after England won the toss.

England lost early wickets and despite Jos Buttler's spirited 54, were bowled out for 137 with three balls to spare.

"England would have been pretty happy for the first 17 overs of the New Zealand innings, but then gave away 46 runs in the last three. The fielding let them down, it probably cost them eight or nine runs."

The tourists had dominated in all disciplines in the opening game in Auckland, but fell flat on Pancake Day as many of their batsmen looked out of touch, while their bowling and fielding became increasingly scrappy as the Black Caps innings went on.

After Stuart Broad had elected to field first, spinner James Tredwell was handed the new ball for the first time in a Twenty20 international.

But the Kiwi openers made an excellent start, and when Rutherford edged Luke Wright to wicketkeeper Buttler in the ninth over, the perfect platform had been set for McCullum to move up through the gears.

A late assault on the England seamers allowed New Zealand to add 46 in the last three overs, with McCullum clubbing Broad for three sixes in the penultimate over to ensure the England skipper, who had taken 4-24 in Auckland, finished with 0-53 from his four overs.

The England chase began disastrously as Alex Hales was bowled by left-arm seamer Mitchell McClenaghan, who was on a hat-trick in the second over after Wright edged his first ball to Guptill at gully.

Jonny Bairstow perished soon afterwards, and with Michael Lumb struggling for form at the other end before he was bowled for 17, the tourists had only reached 31-3 after the six powerplay overs.

Eoin Morgan was gifted two lives after McCullum missed a stumping chance off his brother Nathan, and Rutherford shelled a straightforward catch on the mid-wicket boundary, but a wretched innings of 13 from 22 balls was ended when Morgan holed out off Ian Butler, who took a miserly 2-9 bowling his four overs straight through.

That wicket left England 47-5 in the 11th over, and it soon became a procession of wickets as Samit Patel was run out ball-watching, and Broad lofted an easy catch to mid-off.

Buttler was the only bright spark in England's batting order, bludgeoning, hoisting and scooping his way to reach his half century from 28 balls before he skied a catch into the covers.

But there was already too much for England to do by then, and New Zealand sealed victory as James Franklin (4-15) bowled Tredwell for a breezy 22 and Jade Dernbach hit his first ball to mid-off.

The last match of the series takes place in Wellington on Friday - while England's women will hope for better fortunes against their New Zealand counterparts in Wednesday's crucial Women's World Cup encounter.

101 comments
Back to top
unknown