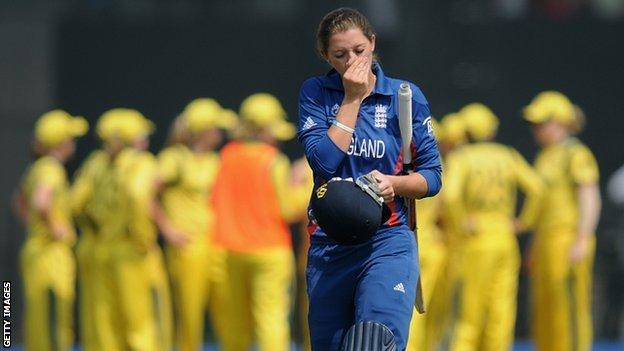 England fell to an agonising two-run defeat by Australia that severely damages their chances of defending the Women's World Cup.

Last-wicket pair Anya Shrubsole and Holly Colvin looked on course to snatch England the most unlikely of wins, only for Colvin to be caught behind off Erin Osborne within one blow of victory.

In pursuit of 148, England had earlier been reduced to 39-6, only for Lydia Greenway (49) and Laura Marsh to drag them back into the contest with a painstaking stand of 57.

When they fell, the game looked to be up, but after coming together with 34 needed, Shrubsole and Colvin counter-attacked to keep England alive.

In the most dramatic of finales, however, Australia were able to strike the final, telling blow to extend the run that has seen them go unbeaten against England in World Cup matches since 1993.

"Everything went in England's favour today, they won the toss and bowled well but they've given this match away with poor batting and loose shots up top. On a pitch like this, there's no excuse for shots like that. I think Australia captain Jodie Fields was really aggressive and smart with her field placings."

In doing so they stay top of the Super Six table on six points and are on the verge of the final.

With only the top two teams going through, England now need to win their remaining two games against South Africa and New Zealand and hope other results go their way.

For that to happen, Charlotte Edwards's side must first recover from losing a game that looked to be within their grasp as new-ball pair Shrubsole and Katherine Brunt again wreaked havoc in the damp morning conditions in Mumbai.

The Aussies, so dominant in winning all their first-round matches, were reduced to 32-5 by the skilful swing and accuracy of England's pace duo.

Swinging the ball into the right-hander, Shrubsole accepted Rachael Haynes' return catch before bowling Jess Cameron with an unplayable yorker.

Then, in between Brunt and Jenny Gunn removing Alex Blackwell and Fields respectively, Shrubsole got the key wicket of Meg Lanning, who chased a wide one to edge behind.

It could have been worse for Jodie Fields' side had Lisa Sthalekar not been dropped on 11 by Greenway off the bowling of Gunn.

Sthalekar went on to make 41, adding 82 for the sixth wicket with Sarah Coyte, who contributed 44. It was a crucial stand in the context of the match, but England will know it was their own batting that cost them.

They may rue the poor umpiring decisions received by Edwards and Marsh, lbw to Megan Schutt and Coyte respectively when both deliveries looked to be drifting down the leg side.

However, in between, the top order were masters of their own downfall with Sarah Taylor, Danielle Wyatt and Arran Brindle all falling to poor shots.

And, after Heather Knight played all around Julie Hunter to be trapped lbw and Gunn was beaten by Holly Ferling's extra pace to be bowled middle stump, it completed a collapse of four wickets for two runs in three overs.

England looked to be in a hopeless position, only for the experienced duo of Greenway and Marsh to drag them back into the match.

With patient, risk-free batting, they ran well and accepted any loose deliveries that came, inching their way to a half-century stand in 136 balls.

However, just as England were getting a foothold, Marsh was harshly given out leg before for 22 and Greenway patted 17-year-old Ferling to cover.

England looked beaten, but Shrubsole and Colvin had other ideas. With Colvin taking Sarah Coyte for three boundaries in an over and number 11 Shrubsole hitting Sthalekar over the top for another four, England strode towards their target.

But with Colvin looking for the winning runs, she got a feather through to Fields to hand victory to the Australians.

The Sri Lankans were bowled out for 103, with Lea Tahuhu taking four wickets before the Kiwis chased down the runs in 23 overs.

Chasing 231 to win, the Caribbean side survived a middle order collapse to scramble home in the 46th over.