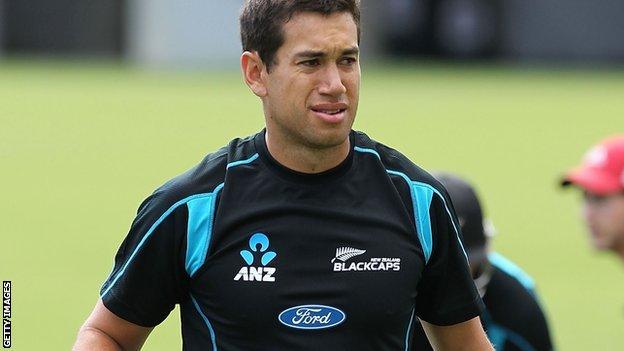 England batsman Eoin Morgan says New Zealand will be a stronger proposition with Ross Taylor back in their squad.

The 28-year-old resigned as the Kiwi Test captain in December following his dismissal as one-day and T20 skipper.

He missed the tour of South Africa but is back for the three-match T20 series with England starting on Saturday.

"He is a big danger, a very successful one-day and Twenty20 cricketer and someone we look to as a possible threat in this series," Morgan said.

Taylor, who averages 43 in Test matches, 37 in one-day internationals and 24 in T20s, insists he had made peace with New Zealand head coach Mike Hesson, who preferred Brendon McCullum as captain in the two shorter formats of the game.

"I can't speak for anyone else, I can only say what I see myself and I haven't seen anything untoward towards me," said Taylor, of his welcome back to the squad.

"I always enjoy representing my country, and hope I can do that with some pride over the next six weeks of this tour.

"I've got friends in the team and I'm looking forward to playing for them, and obviously the management and the country as well."

Taylor replaced Vettori as captain in June 2011, and, although he guided New Zealand to a Test win in Australia and a drawn series, his team suffered series defeats at home to South Africa and then away to West Indies and India.

Taylor's Kiwis went out of the World Twenty20 tournament in Sri Lanka at the Super Eights stage and lost 10 of their 14 completed one-day internationals in 2012.

Morgan, who has an average of 36 from 32 T20 internationals, said: "I think I'd find it difficult if I didn't get along with the coach.

"You spend a lot of time with each other, and your coach is normally someone you seek advice from. For me, it would be crucial to get along with my coach."

Without Taylor, who has scored 119 runs in six T20s against England, the Kiwis lost both Tests in South Africa last month and also lost the preceding Twenty20 series 2-1, but beat the Proteas 2-1 in the one-day series.