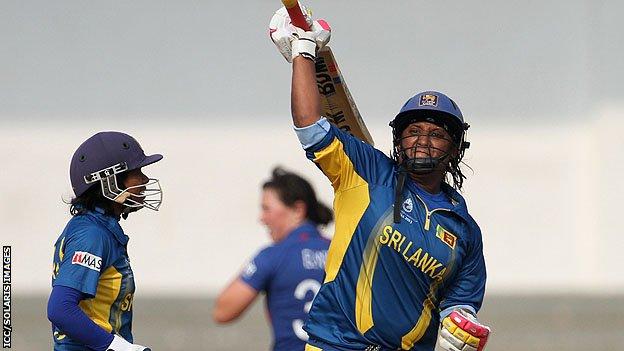 England suffered a shock one-wicket defeat by Sri Lanka in their opening group match at the Women's World Cup after a thrilling contest went down to the final ball.

The defending champions had been well below their best throughout, but still looked likely to defend their total of 238-8 as the Sri Lanka middle order buckled.

But, a brilliant 41-ball 56 from Eshani Kaushalya left the minnows needing only nine to win from the final over and, when Georgia Elwiss was dispatched over mid-wicket for a maximum, the result was as good as confirmed.

There was still time for Elwiss to drop a simple chance to remove Kaushalaya - who had earlier been dropped by Jenny Gunn - and the same batter to be run out looking for the winning run.

Two dots followed, but with a single needed to win and the final pair at the crease, Dilani Manodara hit the last ball of the match for six to give Sri Lanka their first win over England in any form of the game and with it, produce one of the biggest shocks in World Cup history.

"This was definitely a major blow. I think the girls should go away and forget about today and go back to basics. With the West Indies and India coming up they need to make sure they hit their mark in time for the Super Six stage. It is possible, but they need to go away and regroup."

With three teams set to qualify from Group A, England's chances of progressing are far from over, but they may now have to beat India and West Indies if they are to reach the Super Six stage.

And on this evidence, Charlotte Edwards's side need to improve in every department if they are to advance, as they were given a lesson in accurate bowling and boundary hitting by the lowest-seeded team in the tournament.

England's top order had failed to fire in the warm-up defeat by New Zealand and now, with a hamstring injury denying them the services of Sarah Taylor, they again struggled in dewy conditions after being asked to bat first.

Their calm progress showed that the Sri Lanka attack posed no great threat, but Shashikala Siriwardene's side were so disciplined as to not concede a single boundary from the 18th to 41st over.

Still, it was batting errors that further hampered England, with Brindle run out after being sent back by Knight and the latter being bowled when attempting a slog sweep of the impressive leg-spin of Sandamali Dolawatte.

At 114-5 England were again in trouble as debutant Amy Jones - in the side as Taylor's replacement - joined Gunn.

Their response was a counter-attacking stand of 83, both players looking to sweep and use their feet to the spinners.

Finally England were able to use the lightning-fast Brabourne Stadium outfield to their advantage and, even though Gunn fell for 50 and Jones 41, Katherine Brunt arrived to hit the only six of the innings as 94 came from the final 10 overs.

Sri Lanka, though, were not daunted by the prospect of the chase and, with Yasoda Mendis enjoying the luck of being dropped off Brunt by Knight at first slip, she and Chamari Atapattu set about their task with some free-flowing strokeplay.

With the left-handed Atapattu often flaying through the off side and both players keen to sweep, some wayward England bowling was punished.

As an almighty shock became a possibility, England finally made the breakthrough when Atapattu slapped Brindle to midwicket.

And, after Brunt's extra pace had Mendis miscuing to Danielle Hazell, the door was open to make inroads into the Sri Lanka middle order.

But still Sri Lanka chased, led by the powerful Kaushalya, whose savage treatment of Gunn in the 48th over tipped the balance.

And, when she hit Elwiss into the stands two overs later, Sri Lanka were as good as home. There was still drama to come, but Sri Lanka were not to be denied.

In Friday's other games, elsewhere in Mumbai, New Zealand racked up a massive 320-5 after losing the toss against South Africa, as captain Suzie Bates scored 72 and Sophie Devine smashed six sixes in her 145 from 131 balls.

South Africa were never in the hunt, and were bowled out for 170 as the White Ferns wrapped up a 150-run win.

However, only Bismah Maroof (43) made more than 10 in Pakistan's reply as they were skittled for 84 in 33.2 overs, handing the Southern Stars victory by 91 runs.