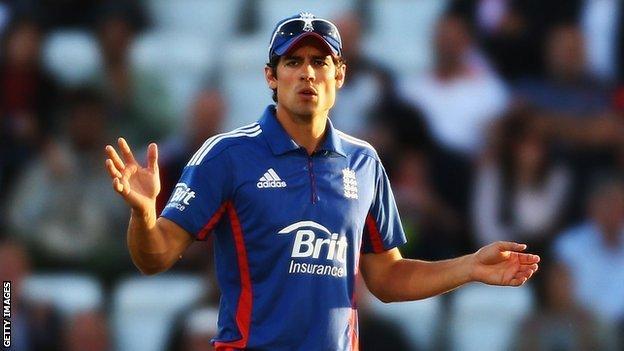 Alastair Cook said England were "outskilled and outplayed" in their 127-run defeat by India in the second one-day international in Kochi.

"You can say we weren't quite at the races today for whatever reason."

Despite having three more matches to put things right, England will be concerned that their bowling attack struggled to contain India.

India captain Mahendra Dhoni smashed 72 from 66 balls and man of the match Ravindra Jadeja was equally destructive, hitting an unbeaten 61 from 37 balls.

The tourists then lost key batsmen Kevin Pietersen and Eoin Morgan in one Bhuvneshwar Kumar over to slump to 73-4 - a position from which they never recovered.

"[The pitch] spun a little bit more but you can't use that as an excuse for why we didn't win the game," said Cook. "We got outskilled and outplayed today so it's tough.

"Credit to India, they put us under pressure - especially their batting after the first 10 overs. But it's important to remember it's 1-1 in the series so it's all to play for."

Steven Finn and Jade Dernbach had India in early trouble when they removed both openers inside five overs, but Virat Kohli (37), Yuvraj Singh (32) and Suresh Raina (55) batted watchfully to give Dhoni and Jadeja the platform to set up India's match-winning total.

"I think everyone performed really well," said Dhoni. "We didn't get off to a good start. It was a bit tough for the openers with the ball seaming around a bit.

"But Yuvraj batted great, he gave us that platform along with Virat Kohli and then we were in a fantastic position to cash in.

"It was a fantastic innings by Jadeja. We thought the wicket would dry up and the spinners would not get a bit of turn.

"But I was wrong. There was plenty of turn for the spinners and I think Jadeja made the most of it so at the end of the day we had plenty of runs."

The third match is on Saturday in Ranchi.