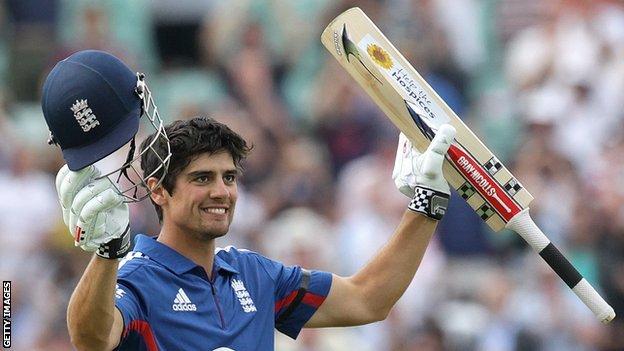 Alastair Cook says England must wait until their one-day international series with India ends before judging their progress in the 50-over game.

England go into Tuesday's match in Kochi with a 1-0 lead in the five-match series after a nine-run win in Rajkot.

They are aiming to clinch their first ODI series win in India since 1984-85.

But captain Cook told BBC Sport: "The guys have improved but we will have a slightly clearer indication of that towards the end of the series."

Cook added: "This is a similar side to the personnel we had in 2011.

"It will be a marker to see if we have improved as players, as individuals and, more importantly, as a team."

England were helped to victory in Rajkot by 21-year-old ODI debutant Joe Root, who was picked for his batting but impressed with the ball, bowling nine overs for 51 runs.

Cook said: "He impressed me hugely having to handle that situation on debut - especially as a part-time bowler.

"You always hope to get a few overs out of him but to get nine like we did was very encouraging.

"He has all the right attributes. He works hard and most importantly he has a very good temperament for international cricket.

"He looks a fine prospect. But let's not build him up too much. He has a lot of work to do but he knows that better than anyone."