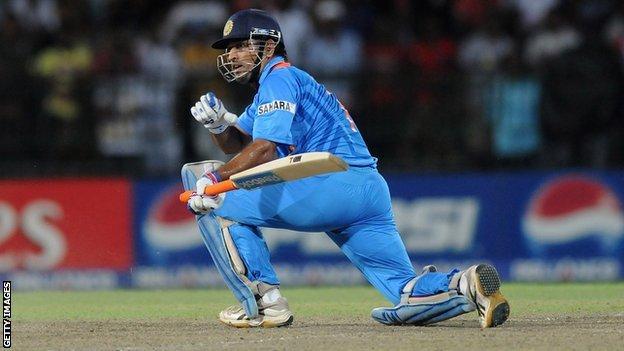 India gave themselves a boost ahead of their series with England by winning a thrilling third and final one-day international against rivals Pakistan.

Pakistan still won the series 2-1 while the Twenty20 series ended level at 1-1.

Despite 36 for captain Mahendra Dhoni and 31 for Suresh Raina, India were bowled out cheaply with more than six overs of their innings remaining.

Off-spinner Ajmal's superb display appeared to be sending the tourists to a series whitewash.

But India produced a stirring fightback on a pitch that offered both seam and spin, with fast bowler Sharma leading from the front and Bhuvneshwar Kumar and Ravichandran Ashwin both taking two wickets apiece.

Pakistan appeared to be in control when opener Nasir Jamshed (34), who made centuries in the two previous matches, and skipper Misbah-ul-Haq (39) were at the crease.

But when they both departed the tourists lost regular wickets and could not halt India's momentum.

Pakistan still had a chance when they needed 12 to win with eight balls left when last man Hafeez was unsettled by a Sharma chest high full toss and next ball he was caught at short midwicket by Yuvraj Singh to end the game.