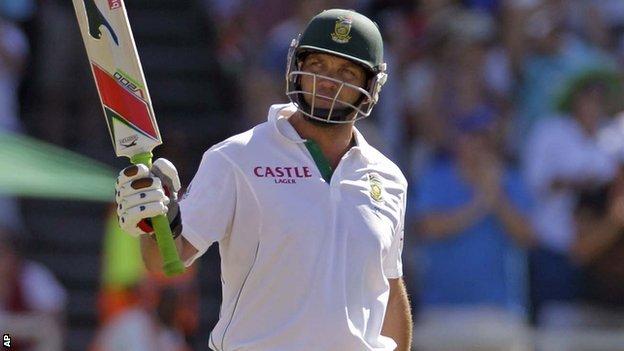 The 37-year-old reached the mark with a four through third man off seamer Doug Bracewell after tea in the first Test against New Zealand at Cape Town.

"I'm probably batting as well as I've ever batted in my career," said Kallis, who was later out for 60.

"Hopefully I can carry on with that form for a little while longer."

Kallis achieved the milestone having played the fewest Tests of the four (159).

Cape Town-born Kallis, who celebrated the milestone on his home ground at Newlands, has also taken 282 Test wickets in a 17-year Test career.

Having needed to score 20 to reach the 13,000 figure, he completed his 57th Test fifty in 68 balls, before departing for 60 when he edged seamer Trent Boult to keeper BJ Watling.

"I love playing at Newlands so it was nice that I could get that achievement here," said Kallis.

"The public have been fantastic to me. To get an ovation like that certainly means a lot to me, and these are very special moments that will live with me forever."

"When I feel that I'm not contributing to the team in the way that I think I should be, or holding some youngster up, then I'll definitely start thinking about it (retirement)," he added.

"But that's certainly the furthest thing from my mind at the moment."

Earlier in the day, New Zealand were bowled out for 45 - their third lowest all-time Test score - in only 68 balls, while the Proteas finished day one on 252-3, with Alviro Petersen 103 not out.