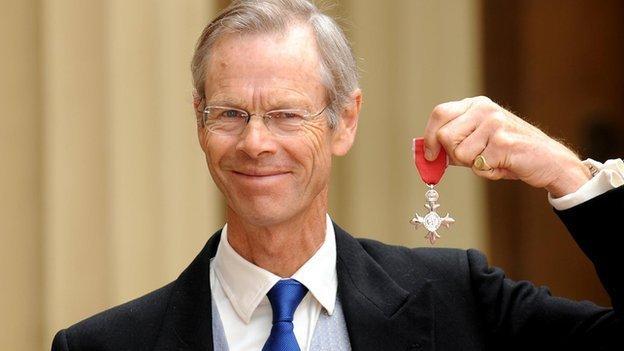 "Has anyone seen CMJ?" That is probably the most familiar phrase that I have uttered in my five years as Test Match Special producer.

The eccentric time-keeping of Christopher Martin-Jenkins led to one of his nicknames in the TMS commentary box to be "the late CMJ". It is heart-breaking that he will now always be so, having died on New Year's Day at the age of 67 from cancer.

His punctuality may have tested the patience of a radio producer but his visits to the microphone were always worth the wait.

CMJ was a master wordsmith. He always had the knack of producing the perfect phrase for any significant moment, but perhaps even more impressively he had the ability to lift the mundane.

A ball outside the off stump was "across the bows". A drive through the covers for one was "stroked crisply". CMJ would never settle for using lazy language.

Growing up, CMJ was simply the sound of summer. I became obsessed with cricket in 1981 when you were able to enjoy CMJ on both BBC TV and on Test Match Special.

I recall when Ian Botham came to the crease in the second innings at Headingley, CMJ stating "what a triumph it would be if he was still batting at 6 o'clock this evening". Of course Botham was still batting next morning as England went on to secure a famous 18-run win over Australia.

Over the years I sought out examples of his work in the BBC archives. His excitable description of Geoff Boycott scoring his hundredth century, also at Headingley, and the winning of the Ashes in 1977 to name but two. What set CMJ apart as a commentator was the combination of great authority with a lightness of touch and a seemingly inexhaustible vocabulary.

He was a similar age to my father and there was always something comforting about having a hotel breakfast with CMJ and his wonderfully warm wife Judy when she was travelling with him too.

As a broadcaster and cricket writer he was incredibly generous towards young and aspiring journalists.

He never swore, except at cancer. He would often be at the back of the commentary box poring over his laptop before letting rip with a sudden burst of profanities such as "fiddlesticks" or "fishcakes."

It usually meant his carefully honed close-of-play piece had somehow, inexplicably, been entirely deleted. A click of the undo button usually helped.

Technology was one of two things CMJ never got to grips with, and it provided us and other colleagues with hours of mirth.

He once famously attempted to punch a number into a mobile phone, before it was helpfully pointed out that he was in fact holding the remote control of his hotel room's TV.

All those who have known him and worked with him will feel privileged. Thoughts and prayers go out to his loving family. He'll be greatly missed.

He was a man who embraced the modern game, but also became the guardian of all that is good in the traditions of cricket. He remains the only journalist to be asked to deliver the prestigious MCC Spirit of Cricket lecture, reflecting how important he held that spirit to be.

It was a huge privilege to work with him on Test Match Special. CMJ was one of life's great gentlemen who always made a tremendous effort to get to know new members of the team.

My first series as part of the TMS team was the 2002-03 Ashes and I arrived in Melbourne on Christmas Eve not knowing anyone. CMJ took me under his wing and I remember the fun we had trying to answer Harry Potter questions at the Christmas Day media quiz.

Things were always more interesting at social events he had organised. In Guyana in 2007, CMJ offered to take the younger members of the BBC cricket team on a night out during the World Cup. Sadly, he'd given the selected restaurant the wrong date and the evening became a three-hour trawl around the lesser known hostelries of Georgetown.

His phobia of technology is well celebrated - trying to make a telephone call with a TV remote control and all that.

I will never forget on the first morning of the 2009 Ashes Test CMJ decided to buy a new laptop on the way to the ground in Cardiff. On the busiest day of the summer he then proceeded to engage who he could at the ground to try and help him make this new device work.

He was also unbelievably forgetful. During a Lord's Test he asked me if I could leave him off the rota before lunch as he had been invited to the England and Wales Cricket Board chairman's box.

I duly did so, only to be surprised to see him queueing for food in the media centre later. "Wasn't the lunch any good in the box?" I asked him. "What box?" he said.

"The chairman's box," I replied. CMJ then let out a stream of his famous "non-swear words" and ran to the other side of the ground.

If there is one moment that I will think of most fondly about CMJ it will be when he got the fit of the giggles at Lord's four years ago. It started as an innocent spell of commentary on a match against New Zealand: "Broad's in, he bowls, this time Vettori lets it go outside the off stump, good length, inviting him to fish," he said.

However, the giggles came only seconds later as he went on to describe Vettori's response: "But Vettori stays on the bank... and keeps his rod down, so to speak."

At that point, sniggers could be heard in the commentary box from myself and others as CMJ tried in vain to regain his composure.

"I don't know if he is a fisherman, is he?" he said as his voice got higher, struggling to stifle his laughter.

CMJ will be remembered as quite simply one of the legendary characters of cricket broadcasting, someone impossible to replace in the Test Match Special commentary box.

His time-keeping may have rendered the TMS daily rota merely a basis for negotiation but I dearly wish he was still around. Next summer I am sure to call out "where is CMJ?" before remembering with sadness he won't be there.