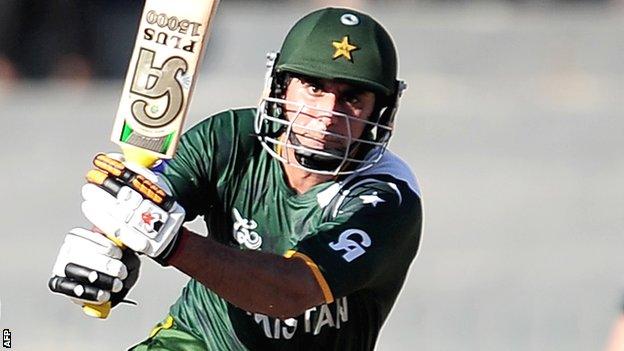 Nasir Jamshed hit an unbeaten 101 as Pakistan beat India by six wickets in Chennai in the first game of a three-match one-day international series.

Debutant Bhuvneshwar Kumar struck with the first ball of the Pakistan reply but Younis Khan and Jamshed put on 112.

Left-hander Jamshed made his second ODI ton as Pakistan won with 11 balls left.

After missing the Virender Sehwag returned to open India's innings with Gautam Gambhir.

But both were back in the pavilion by the fifth over as Pakistan won an important toss, which was delayed for an hour because of a damp pitch.

India captain Dhoni, dropped by Misbah-ul-Haq on 17, took 79 balls to score his first boundary but passed 7,000 one-day international runs, reaching his eighth ODI hundred with a six over cover off Mohammad Irfan.

Despite that, India's total looked below average, but they were given encouragement when the wiry Kumar, 22, bowled Mohammad Hafeez, who offered no stroke.

Kumar, who also struck in the first over of his Twenty20 international debut on Tuesday, had Azhar Ali caught cheaply but Younis settled the innings with a stylish 48th ODI half-century.

He clipped a low catch to mid-wicket but Jamshed, effective if not aesthetic, was reprieved on 68 when Yuvraj Singh spilled a chance at point.

With 41 needed from 49 balls Shoaib Malik was caught behind off Ashwin, only for it to be called a no-ball after video footage was checked.

On 99 , Jamshed, in his 20th international, was hit on the helmet by Ashok Dinda but the 23-year-old pulled the next ball for the single he needed to reach three figures from 127 balls, and Shoaib pulled the winning boundary in the penultimate over.