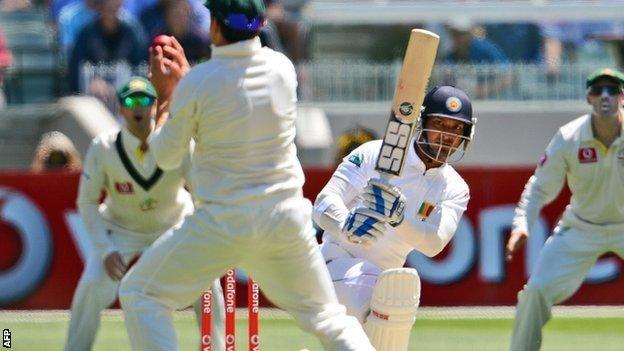 Sri Lanka batsman Kumar Sangakkara became the 11th cricketer to pass 10,000 career Test runs on the opening day of the second Test against Australia in Melbourne.

The 35-year-old former captain hit a cover drive for four off the bowling of Mitchell Johnson in the last over before lunch to reach the milestone.

He was eventually dismissed for 58 by Johnson as Sri Lanka reached only 156.

In reply Australia were in a strong position at close of play on 150-3.

Openers Ed Cowan and David Warner made a good start as the hosts, one up in the series, reached 95 without loss, but Sri Lanka halted their progress with three quick wickets following the drinks break in the post-tea session.

But 20 not out from Australia captain Michael Clarke, who was passed fit after a hamstring injury, and Shane Watson (13 not out) survived a tense final hour to make it to stumps.

The only other Sri Lankan to have made more than 10,000 Test runs is Mahela Jayawardene who has 10,674 runs after being dismissed for three on Wednesday.

Sangakkara finished the day as Sri Lanka's wicketkeeper after Prasanna Jayawardene injured his right thumb while batting and tests later revealed he had a hairline fracture.