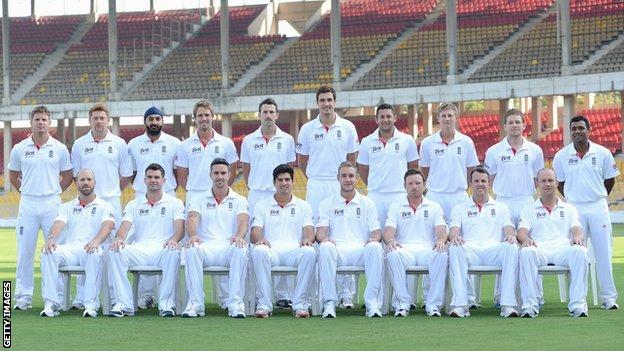 England have completed their first Test series win in India for 27 years.

After losing the first Test in Ahmedabad, they battled back to win in Mumbai and Kolkata, and draw the finale in Nagpur.

Here are some statistics from an enthralling series.

The numbers that mattered

11: Wickets taken by Monty Panesar on his comeback Test at Mumbai. His 11-210 was the third best match figures at the Wankhede Stadium, behind Ian Botham (13-106), Laxman Sivaramakrishnan (12-181).

The series in numbers

12: Wickets taken by James Anderson in the series - and the combined haul of India's seamers from 190.3 overs.

16: Ian Bell's century in Nagpur was his first in India, in his 16th innings. Though he struggled with the bat and missed a Test after the birth of his first child, a couple of not-outs lifted his series average to 43.

19: Number of players in England's touring squad at one time. Fifteen played, while Eoin Morgan, Graham Onions, James Tredwell and Stuart Meaker did not feature in the Tests.

20: Wickets taken by Graeme Swann and Pragyan Ojha, the joint leading wicket-takers in the series.

44: Number of maiden overs bowled by both Panesar and Swann apiece in the series. They combined for 25 in the final Test.

44: The number of innings Swann had batted since his last Test fifty in 2009, before his glorious 56 in Nagpur.

60.75: Batting average of Ravichandran Ashwin, who is in the India side for his bowling. He took 14 wickets at 52.64 in four Tests.

91: Wicketless overs bowled by England seamers Stuart Broad and Tim Bresnan in four combined appearances, at a cost of 299 runs.

99: Nmber of Tests played by off-spinner Harbhajan Singh, who was dropped after the Mumbai Test and may struggle to play his 100th.

135: Samit Patel's bowling average for the series indicates he may have to earn future Test selection purely for his batting.

288: James Anderson, who ploughed a lone seam furrow for England for much of the series, is nine Test wickets away from equalling fourth-placed Derek Underwood in England's all-time bowlers' list, with Fred Trueman (307), Bob Willis (325) and eventually Ian Botham (383) in his sights.

5: Set a new world record with centuries in his first five Tests as captain.

190: Top score for the series by Cook at Kolkata, his third highest in Tests.