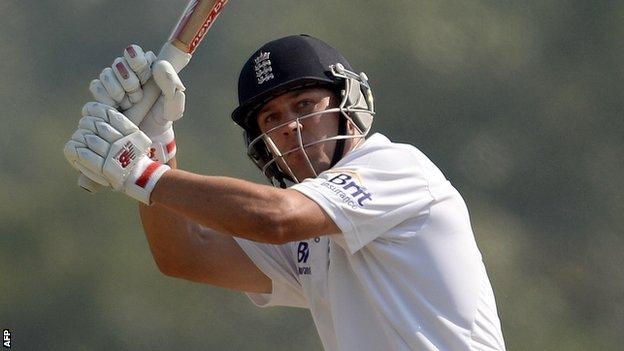 James Anderson says the first hour of the final day will determine whether England will clinch their first Test series win in India since 1985.

"There's still a long way to go in the game," Anderson said.

"The first hour will be crucial. If we can get through that then hopefully we can build a couple of good partnerships and make sure the game is safe."

I think [Trott] quite enjoys the pressure. Some batsmen are really determined and I think he's the sort of guy that would relish that battle and really try to get stuck in

Jonathan Trott (66 not out) and Ian Bell (24 not out) will resume their partnership when play gets under way at 04:00 GMT on Monday.

Trott was the target of sledging in the final hour of Sunday's play following an unsuccessful appeal when Ishant Sharma thought he had the batsman caught behind.

Trott also drove a stationary ball for a boundary after it slipped out of Ravindra Jadeja's hand during his delivery stride.

At one point Trott blew a kiss to Ishant and also angered Ravichandran Ashwin, who felt the England number three was backing up too far at the non-striker's end.

Ashwin said: "It was just one or two words exchanged. We are pushing for a win, but nothing got out of hand."

Anderson expects Trott to thrive under the extra pressure on the final day of the series.

He said: "I think he quite enjoys it. Some batsmen are really determined and I think he's the sort of guy that would relish that battle and really try to get stuck in.

"When we're in the middle of a tough Test match, a crucial Test match, things are going to get heated from time to time."