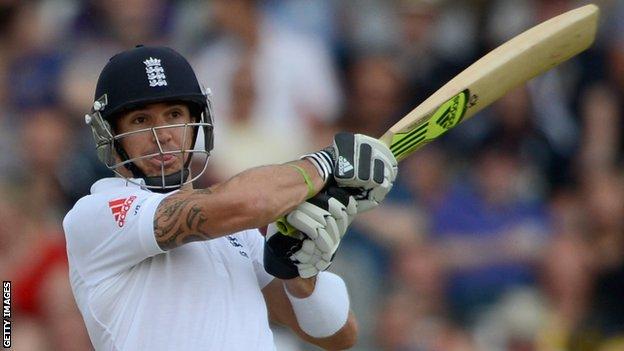 Kevin Pietersen has said the Nagpur wicket was "the toughest" he has played a Test on and he has no idea how to gauge England's opening-day progress.

Pietersen, 32, was made to fight for each of his 73 runs as India restricted his side to 199-5 in the fourth Test.

"It's the toughest wicket I've played Test cricket on in terms of trying to play strokes," the batsman stated.

"But what the wicket's going to do, I haven't got a clue - it looks similar now to what it did when we started."

"Not once during the build-up to the game did I see the headline 'Joe Root must play', but the way he batted vindicated the decision to hand him his first Test cap."

Despite winning the toss, England slumped to 139-5 on a slow and low wicket which saw captain Alastair Cook out for lbw on 1 following his heroics in the third Test.

Similarly low scores were recorded by Nick Compton and Ian Bell, but measured knocks by Pietersen and Jonathan Trott laid the platform for a stoic unbroken 60-run partnership from wicketkeeper Matt Prior and Test debutant Joe Root.

Sheffield-born Root impressed in particular as his careful shot selection saw him to an unbeaten 31 from 110 balls at stumps in the face of the host's four-man spin attack.

"Joe was brilliant," said Pietersen. "He's his own man; he played some lovely cricket shots and has a good head on his shoulders.

"Never judge anybody after a couple of hours batting for England, but he's shown signs of what could be a very good Test career. He didn't need too much help, he came in there, and was scoring freely.

"He's a good little player and a lovely man as well. He's a good human being."

Although India selected a spin-heavy bowling line-up, the early wickets of Cook and Compton were taken by fast bowler Ishant Sharma. Pietersen believed the 24-year-old Sharma's success was a good sign for England, who boast Tim Bresnan and James Anderson in their side.

"I think we are in a position of strength... Having two seamers," the Surrey man said. "Ishant, I found incredibly difficult to play today.

"All I know is that scoring was incredibly hard, especially against Ishant - so we hope 'Bressie' [Tim Bresnan] and Jimmy [Anderson] can do us a really good job."