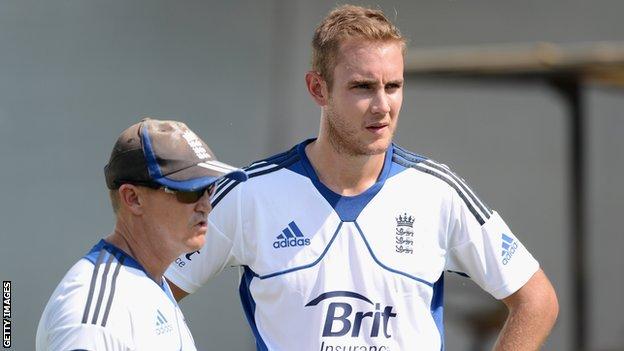 England Twenty20 captain Stuart Broad has been ruled out of the upcoming two-match series against India with a bruised left heel.

Broad will return to England to rest the injury and will be replaced by uncapped Middlesex's Welsh bowler James Harris, 22.

Eoin Morgan will captain the side in Broad's absence with the first match taking place in Pune on 20 December.

Steven Finn will also return to the UK after straining a disc in his back.

The 23-year-old was ruled out of the fourth and final Test at Nagpur with the injury, and was replaced in the team by Tim Bresnan. Finn, who was rested from the T20 squad, is expected to be available for the one-day series against India, which starts in January.

Harris is already in Pune with the England Performance Programme. The Swansea-born seamer moved to Middlesex from Glamorgan in September in the hope that playing for a County Championship Division One side would lead to full England honours.

"The selectors said it wouldn't make any difference in their personal thinking if I was to stay and play my cricket at home in Glamorgan," he said at the time.

"They said it wouldn't matter if I stayed in Division Two, but I think that playing cricket in Division One, there's more big games all the way through the season at both ends of the table."