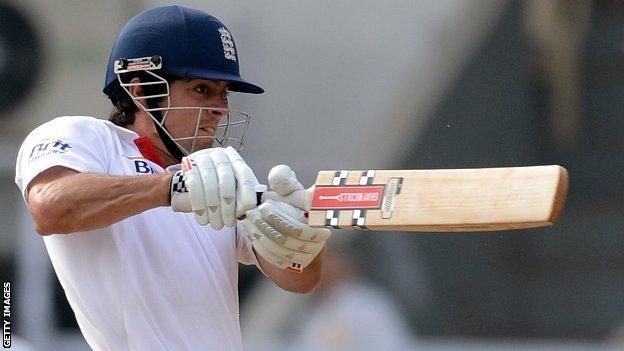 Cook, 27, became the youngest player to reach 7,000 Test runs and England's most prolific centurion with his 23rd as England beat India in Kolkata.

"Potentially [Cook] could go onto that sort of level," Gooch told BBC Sport. "I don't think he's reached his peak."

Cook scored superb hundreds in Mumbai and Kolkata to help England take a 2-1 lead over India with one match to play, simultaneously extending his record of having recorded a century in each of his first five Tests as captain.

Gooch, who challenged England to finish the job with victory in the final Test in Nagpur, says several factors will determine whether Cook gets close to the run tallies of Tendulkar or Australia's Ricky Ponting, who retired from international cricket last week after scoring 13,378 Test runs.

"Fitness, drive and motivation will all come into it," said Gooch. "But he's got a good game at the moment and the application of that game has been exceptional in the last two matches.

"He's well balanced and I'd like to think he could do that, but we don't know.

"I have always said that the best years for a batsman are 27 to 35. Alastair will be 28 years of age [on 25 December] and has got all the best years in front of him."

Gooch, who mentored Cook through the youth system at Essex, says his protege's stellar performances are the product of hard graft.

"Over the last six years or so he's worked lots on his game, his technique, his knowledge and I think what you see now is a product of all the hard work that he's put in to shape that game," he said.

"What you saw in Mumbai was an exhibition of how to score runs on a turning wicket."

England only need a draw in the final Test, which starts on Thursday, to secure their first series victory in India since 1985.

But, with the pitch expected to turn from day one and produce a positive result, Gooch wants England to play for the win.

"I don't think for one minute that the guys think the job is done," he said. "We're 2-1 up with one to play. We want a positive result in Nagpur.

"I don't think I'm giving anything away by saying it's going to be a result pitch in Nagpur. If I was India I would want a result pitch to take my chances."