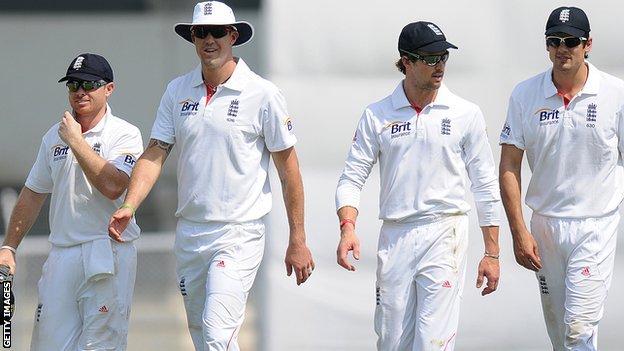 The turnaround completed by England to beat India so convincingly in Mumbai and Kolkata after the big defeat in Ahmedabad is truly remarkable.

It was feared England would travel to India under a new captain in Alastair Cook, get beaten and suffer badly from the experience.

Those fears were not unfounded. England had previously endured a tough year, with the humbling defeat by Pakistan in the UAE followed by the surrender of top spot in the world rankings at home to South Africa.

In many ways, though, both of those experiences have made England stronger.

The South Africa defeat came amid the backdrop of the Kevin Pietersen saga - with the batsman dropped and then reinstated over texts sent to the opposition camp - but, I have been told by one of the players, that episode has well and truly been put to bed. Spirit in the camp is now genuinely high - that is not just toeing the party line.

And the lessons from the UAE, when England struggled to deal with quality spin on Asian wickets, look finally to have been learnt.

What makes England's achievement in India all the more impressive is the manner in which these wins have been earned.

"The mood must be very buoyant in the England dressing room. They have worked harder than India more than anything. The biggest gulf was probably the seamers, Finn and Anderson, and when your fast bowlers are on top it doesn't half make life easier."

They have lost three tosses in alien conditions but, after the hammering in Ahmedabad, have inflicted two crushing defeats on India, who rarely lose at home. Before this series, India had played 59 home Test matches this century, losing only nine. Now they have lost two in a row. That speaks volumes for how they have been outplayed by a brilliant England side.

Of course, I also have to point out that as good as England have been, India have been awful - especially their batting.

But after Ahmedabad, a few basic things were rammed home to the England team.

Deep down, they knew they had a better bowling attack than India, but that was never going to do them any good unless they had runs to play with.

The tourists worked out what they had to do - bat long, sell your wicket dearly.

The results are plain to see. Cook is in stellar form. Pietersen is transformed. Nick Compton looks at home at the top of the order and Ian Bell batted well on the last day in Kolkata.

Perhaps batting coach Graham Gooch deserves some of the credit. He is tireless in his work with the players, especially those who want to improve. Often during the third Test he has been in the nets throwing balls at 7.30 in the morning.

It's also the tiny, minute details where England have gained the advantage. One lunch time, I looked out of the commentary box to see three players in the nets. On closer inspection, I saw they were Steven Finn, James Anderson and Monty Panesar.

That striving for improvement, the attention to detail, is what can make all the difference.

Before we get carried away, we should recognise that England could still get caught out on a result wicket in the final Test in Nagpur. However, on a decent pitch, even Rahul Dravid says England would start as favourites, something that would have been unthinkable at the start of the series.

And whatever happens in Nagpur, Cook and his men will be able to look back on this tour as a success. What follow are back-to-back series against a New Zealand team in turmoil, which represents a good opportunity to build momentum before the huge double-Ashes year.

Success against Australia and beyond would make the ups and downs experienced in 2012 seem all the more valuable.