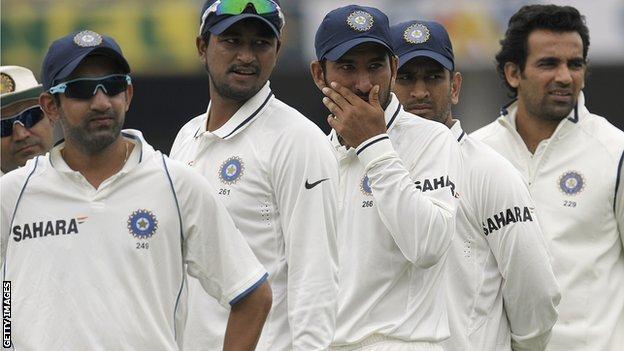 At the scene of one of India's greatest triumphs came one of their most damaging defeats.

Eden Gardens in Kolkata was the ground where India pulled off the mother of all comebacks to defeat Steve Waugh's Australia in 2001 after following on. Until Sunday, they were unbeaten at the ground since 1999 and had won their last two Tests at the venue by an innings.

And yet here they were, being taken apart in their own backyard by England, losing heavily after winning the toss for the second Test in a row to fall 2-1 behind in the series with one to play.

India can still salvage a draw by winning the final Test in Nagpur, which starts on Thursday, but for many observers in this most cricket-obsessed of nations, the time has come for an overhaul of an overpaid, unfit and underachieving squad.

On Sunday the Times of India ran an editorial headlined 'It's Time for a Clean-up' in which it argued that "drastic steps" were needed for a side that "fields terribly, bowls pathetically and capitulates cravenly while batting".

Much of its criticism was aimed at players who have long enjoyed demi-god status in India, with the Times calling for legendary batsman Sachin Tendulkar and World Cup-winning captain Mahendra Dhoni to be dropped, along with opener Gautum Gambhir and veteran bowler Zaheer Khan.

Television channels got in on the act too, with one rolling news station running a live debate entitled 'Sack stars, save India' with the strap-lines 'Why these non-performers must go' and 'They've shamed India'.

It's all a far cry from 16 months ago when India arrived in England as the number one Test side in the world after an unbeaten run of 11 series under Dhoni's captaincy. Since then they have suffered 4-0 whitewashes in England and Australia and are now in danger of losing a home series for the first time since Australia beat them in 2004.

"A lot of people are upset not just by losing but the manner of the defeats," Dravid, who retired from international cricket in March, told BBC Test Match Special.

"India won three tosses and had the wicket in their favour in Mumbai and the best of the batting conditions here in Kolkata but they just haven't been able to capitalise or put up a fight."

As the dust settled on India's latest humiliation, India's selectors went some way to meeting demands for change by dropping Yuvraj and Zaheer from the squad for the final Test and replacing them with seamer Parvinder Awana and batsman Ravindra Jadeja, both of whom are uncapped.

Although both have impressive records - with Jadeja one of only eight players to have struck three first-class triple hundreds - Dravid said he doubted whether Indian domestic cricket was really preparing players for the demands of the Test arena and suggested they could learn lessons from the English system.

"England have put a mirror up to the Indian cricket team and shown them the challenges that they face," he said.

"Successful teams have a group of players who come through together and peak at the same time. One of the challenges India face is that our domestic cricket is not of the quality to allow players to seamlessly move into international cricket.

"I think having A tours and the academy system is becoming more and more important and I think England have been pretty good with that in the way that the academy travels every winter to different parts of the world. I think that is something India can learn from England.

"It is about recognising that the Indian team is in a bit of transition and working out how to bring through young players who have the skill, technique, temperament and desire to play Test cricket."

Dravid's biggest worry is the spin bowling department where the great Indian production line seems to have seized up.

While India appear to have found a batting replacement for Dravid in Cheteshwar Pujara, and have promise in the likes of Jadeja and Manoj Tiwary, they are struggling to unearth successors for leg-spinner Anil Kumble and off-spinner Harbhajan Singh, bowlers with 1,027 Test wickets between them.

Ravichandran Ashwin and Pragyan Ohja have been outshone by their English counterparts Monty Panesar and Graeme Swann, whose series averages of 23.43 and 24.64 are better than any other bowler on either team.

"India have been outbowled in the spin department and that's a worrying sign because spin has been our strength," said Dravid.

"People talk about attitude and say [the players] don't care because there is too much money in the Indian Premier League. That's one side of things but the main thing is their lack of skill and ability, which is more worrying for me.

"It raises questions as to the talent and quality of players coming through."

One of the most striking differences between India and England has been the desire of players to score and save runs.

Over the course of the Kolkata Test, England's batsmen ran three on nine occasions, India not once. Indeed, on one occasion when India should have taken three, Virender Sehwag was sent back by his opening partner Gambhir and run out after a brilliant piece of fielding teamwork on the boundary by Samit Patel and Steven Finn.

"India have been poor in the field and their physical fitness is disappointing me," added Dravid.

"That's not an excuse. You can't demand runs, but you can at least demand accountability in terms of intensity and effort."

Despite the possibility of drawing the series in the final Test, Dravid believes now is the time for India to start planning for the long term.

He concluded: "Irrespective of what happens in Nagpur, the lessons need to be learned from the series if India wants to be a consistently successful team and challenge again for the number one ranking."

With reporting by BBC Sport's Oliver Doward in Kolkata