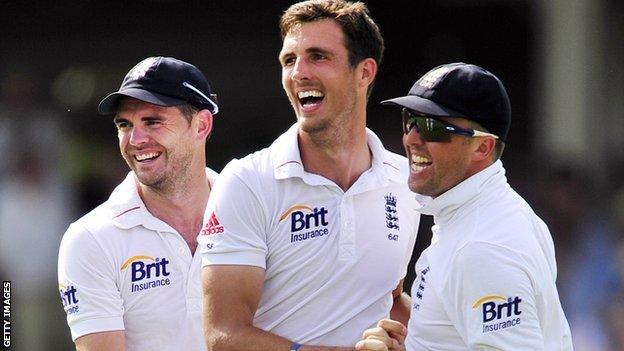 England wrapped up a seven-wicket victory on day five of the third Test to take a 2-1 lead and move close to a first series win in India since 1985.

James Anderson bowled last man Pragyan Ojha with the 10th ball of the day, dismissing India for 247 in Kolkata.

Chasing 41, England lost Alastair Cook, Jonathan Trott and Kevin Pietersen to slip to 8-3, but were taken home by Nick Compton and Ian Bell.

The final Test begins in Nagpur on Thursday at 04:00 GMT.

If England avoid defeat, not only will they end their 27-year wait for a series win in India, but also condemn their hosts to a first home loss since Australia won 2-1 in 2004.

Victory in the final match for Cook's men would also see India lose three matches in a home series for the first time since the all-conquering West Indies side triumphed 3-0 in 1983.

The win at Eden Gardens, where India were unbeaten in seven games dating back to 1999, completes a remarkable turnaround for the tourists, who were thrashed by nine wickets in the first Test in Ahmedabad.

After that defeat they faced criticism for another failure to make first-innings runs in Asia and the decision to omit left-arm spinner Monty Panesar.

But, despite India captain Mahendra Dhoni winning the toss in Mumbai and Kolkata on turning wickets that would supposedly favour the hosts, England have outplayed the home side in all departments.

In a repeat of Mumbai, England's third-Test win came as a result of restricting Dhoni's side on day one, making a huge first-innings total, then taking advantage of India's batting fragility in the second innings.

With India's problems exposed, Dhoni was seen in animated discussion with coach Duncan Fletcher and chairman of selectors Sandeep Patil on the outfield before play began on day five.

The efforts of Ravichandran Ashwin had at least ensured that the home side dragged the match into a final day.

Ashwin was unbeaten on 83 overnight and, with the help of numbers 10 and 11 Ishant Sharma and Ojha, had saved India from an innings defeat.

Chasing a second Test century, Ashwin cracked two boundaries from Steven Finn's first over of the day but could not keep hold of the strike for the second.

"England have beaten India at their own game, despite having lost the toss in their last two matches. They have been playing on subcontinental style pitches, but have emphatically outplayed India. Seven wickets does not really flatter England but that won't matter. It's a terrific turnaround from the first Test."

And, with his fourth delivery of the morning, Anderson got one to move away from Ojha, just making enough contact to persuade the off bail to fall from its groove.

Intent on racing after the target, Cook ran past an Ashwin off-break to be stumped off the fifth ball of the run chase, with Trott trapped lbw on the front foot by left-armer Ojha.

Pietersen lasted only four balls before he edged Ashwin behind, but Bell, in need of some confidence-boosting runs, showed signs of fluency in his classy, run-a-ball 28.

It was Bell that turned Ashwin to square leg to seal England's first win at Eden Gardens since 1977, a victory that ensures Cook's men will not slip behind Australia in the world Test rankings.