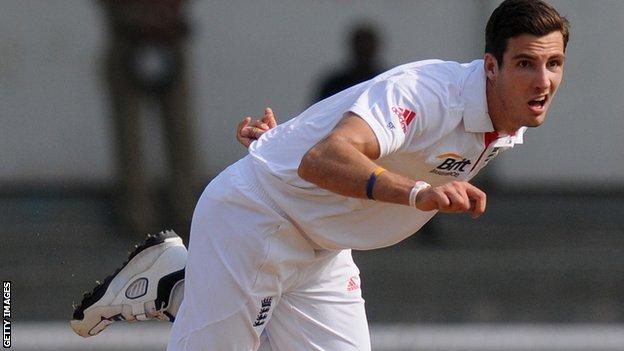 Bowler Steven Finn said patience was key as a strong afternoon session saw England move to the brink of victory in the third Test against India.

Chasing 207 to make England bat again, India raced to 86-0 at lunch but a spectacular collapse saw the hosts lose six wickets for 36 runs.

India hold a slender lead of 32 runs with one day remaining.

"We were patient, even when they had a good start," Finn said. "We stuck to our guns and it paid dividends."

We were fortunate we got so many wickets so quickly, but I think that's testament to the way we bowled

A determined 83 from Ravichandran Ashwin slowed England's progress, but the tourists will be confident of finishing the job on Sunday to take a 2-1 lead in the series with one match to play.

Fast bowler Finn, 23, who missed the first two Tests with a thigh injury, took the key wickets of Gautam Gambhir and Virat Kohli before trapping Zaheer Khan in front to finish with figures of 3-37.

Finn added when speaking to BBC Sport: "We were fortunate we got so many wickets so quickly, but I think that's testament to the way we bowled.

"It's been an exceptionally good Test match so far. This morning we didn't have a great session but we said at lunch 'we have to hit them with everything we have got' and it felt we did that.

"We're in a fantastic position, but we know you don't win Test matches without hard work.

"We have got to come back tomorrow and take the last wicket and hopefully knock off the rest of the runs that we need to win that game. Then we move to the next game."