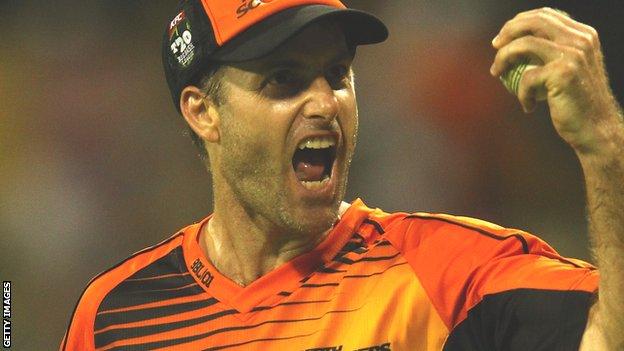 Lancashire have signed former Australia Test opener Simon Katich as their overseas player for the 2013 season.

but has decided to continue his playing career at Old Trafford.

"I'm sure Lancashire will be looking to head straight back up to Division One. I'm determined to play a big part in this happening," said Katich.

"I'd like to thank everyone at Hampshire Cricket for all they have done for me. I leave with many great friends and fond memories.

"I enjoyed working with [head coach] Peter Moores and [captain] Glen Chapple in 2010. Their professionalism and attention to detail was particularly impressive.

"I'm hopeful that, with my experience, I can be a senior member of the squad and help a relatively young group in having a successful season in all forms of the game.

"Next year is a huge year at Old Trafford in that they're hosting another Ashes Test. Having played in an Ashes Test there before in 2005, I know it's going to be a really special time for everyone involved."

Moores added: "It is great news to have secured a player of Simon's quality and his influence will be felt both on and off the field.

"We have an emerging group of Lancashire players who will benefit greatly from his experience and knowledge, and his ability as a player is beyond question."

Lancashire were in September, less than 12 months after winning the title.

Katich is a veteran of the English county game, having also played for Derbyshire, Durham and Yorkshire.

A dogged left-handed batsman and useful spin bowler, Katich made his Test debut for Australia in 2001 and played 56 times for his country, scoring more than 4,000 runs at an average just above 45.

His last Test appearance came during the 2010-11 home Ashes series against England, an Achilles injury curtailing his involvement.

Katich will be available for the entire 2013 season and joins who has also agreed a move to Old Trafford.