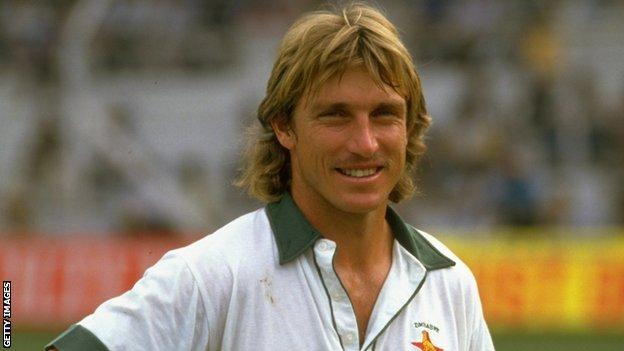 Former England captain Allan Lamb has described the death of his ex-Northants team-mate Kevin Curran as an "absolute body blow".

Zimbabwe will miss him. He's done so much for Zimbabwe

"He was larger than life. I can always remember that smile," South-Africa-born Lamb, who played alongside Curran at the County Ground during the early 1990s, told BBC Radio Northampton.

"He had many friends in Northampton and everyone's shocked."

Curran's heyday came before Zimbabwe were granted Test status but he played in 11 one-day internationals, averaging 26 with the bat and taking nine wickets.

When he retired in 1999 he had accumulated 15,740 runs and 606 wickets in 324 first-class matches for Gloucestershire, Northants and South African sides Natal and Boland.

"Kevin always believed he could do better than anyone else. That's what made him. He was a positive guy," added Lamb, who played 79 Tests for England, averaging 36 runs.

"He always said 'give me the ball and I'll get him out'. Or 'let me go bat at four skipper because I'll score the runs'. He was that kind of character and was a great asset to Northamptonshire.

"We came close to winning the County Championship when he and David Capel were our all-rounders.

"He was one of the fittest guys I've ever known. He didn't smoke, didn't drink much.

"When he played for Northants he kept saying 'we've got to get our players more fit'. He pushed for that and having a fitness routine.

"Kevin was a fit guy all his life and this has come as an absolute body blow. No-one expected it. We don't know if he had problems with his chest before. Time will tell."

Zimbabwe Cricket said Curran had collapsed while jogging in Mutare, but the cause of death is not yet known.

He moved into coaching after his retirement, predominantly in his home country, and Lamb praised his willingness to work in Zimbabwe during the 2000s, a period of unrest when fellow professionals were distancing themselves from the national side.

"Zimbabwe will miss him. He's done so much for Zimbabwe. When so many people left the country he stayed and fought on," said Lamb.