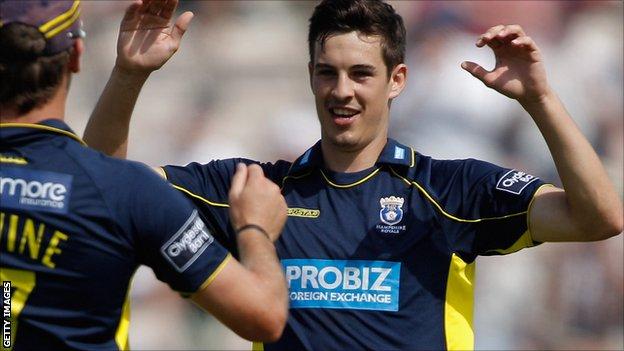 Hampshire bowler Chris Wood has admitted the club's early exit from the Champions League has hurt the squad.

Hampshire had to beat Auckland Aces in Johannesburg in their first pre-qualifying group match, but they were soundly beaten by eight wickets.

It leaves Hampshire playing the Pakistan side Sialkot Stallions on Thursday with nothing on the game.

"It's all been a bit of an anti-climax to be honest," left-arm seamer Wood told BBC Radio Solent.

As Auckland have now won both their matches they qualify for the main tournament, meaning that nothing the CB40 and T20 winners do in their final game on Thursday will make a difference.

"The toss was massive. The wicket was soaking wet and that was a bit of a shame we had to bat first," admitted Wood.

"We lost the toss, they had the best of the conditions and they exploited it the best.

"We've come out here with high expectations. Everyone is devastated.

"There's not a lot riding on the game (on Thursday) now, we have to give it one last push before flying home on Friday."