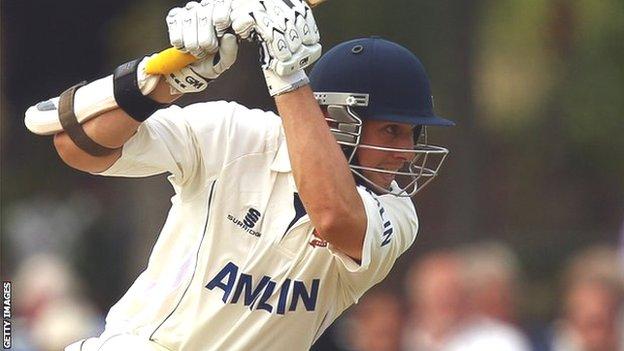 Derbyshire have signed former England Under-19 batsman Billy Godleman on a two-year contract.

The 23-year-old began his career at Middlesex before joining Essex in 2010.

The left-hander went on to hit 1,640 runs in 33 first-class matches, before being released by the side last season.

"I'm thrilled to be joining Derbyshire and am very much looking forward to playing my part in helping the club become established as a force in English cricket," he said.

"I've been inspired by the club's leadership since we first began talking and I'm looking forward to repaying their faith when the 2013 season gets underway."

Godleman, who represented England throughout the junior ranks, has played 69 first-class matches for all sides, and averages 30.23 with the bat.

He hit a record-breaking 149 for England Under-19s in a one-day international against Pakistan in 2007, but has since struggled to make an impact for both his club sides and his country.

"My first-class career began very early with a century on debut at 17, but it has not progressed as I would have liked during the past couple of seasons," he explained.

"However, I believe this opportunity with one of the most ambitious and progressive clubs in the game will provide the platform to re-establish my early credentials as a prospective England player."

Derbyshire head coach Karl Krikken added: "Billy is a talented batsman who, at 23, has a great chance to develop at the club and fulfil his potential.

"He already has experience under his belt, yet he remains ambitious.

"His game is still developing, he is hungry for success and he still has plenty to prove - factors that combine to make Billy an exciting signing."