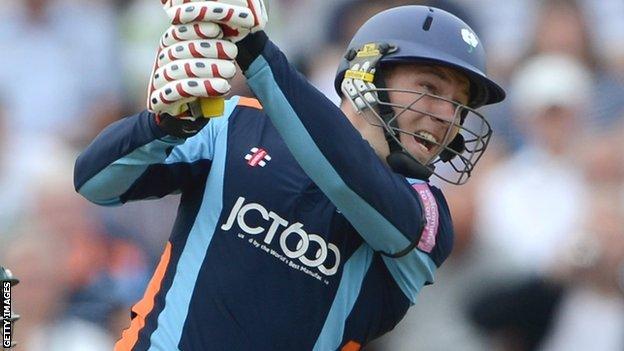 Yorkshire began their Champions League T20 campaign with a five-wicket win over Sri Lankan side Uva Next.

David Miller hit 39 not out, Adil Rashid fired an unbeaten 36 and Phil Jaques made a rapid 32 off 21 balls to give Yorkshire victory in Johannesburg.

But Yorkshire successfully chased down their victory target as they made 151-5 with three balls to spare.

Uva Next captain Thilina Kandamby top scored for his side with 29 not out with West Indies veteran Shivnarine Chanderpaul adding 27.

Miller had to leave the field in the 13th over of Yorkshire's innings when he misjudged an attempted pull-shot and was hit in the face by a bouncer from Umar Gul.

But the batsman returned after the dismissal of Dan Hodgson in the 19th over to hit the winning runs.

Yorkshire will move into the main phase of the Champions League T20 competition if they defeat Trinidad and Tobago in their second qualifying match on Wednesday.

The Tykes are competing in the tournament for the first time after reaching the FL t20 final in August.