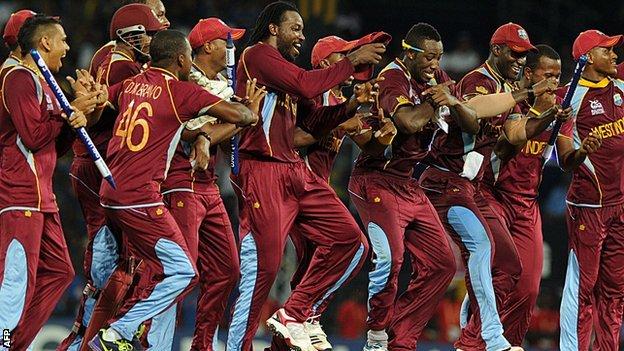 A Marlon Samuels-inspired West Indies recovered from an awful start to beat Sri Lanka and win the World Twenty20.

The hosts looked to be in control in Colombo when the Windies managed only 32 from the first 10 overs, with Chris Gayle taking 16 balls to make three.

"People will rejoice that Darren Sammy has got something to show from his years in charge of the West Indies. He's a delightful man, they've managed to reintegrate Chris Gayle into that side and they've had a wonderful tournament."

Sri Lanka never got to grips with the chase and, although Nuwan Kulasekara's 13-ball 26 gave them hope, they were bowled out for 101 in the 19th over.

The defeat was Sri Lanka's fourth in as many finals after losing the 2009 World T20 final to Pakistan, as well as the 2007 and 2011 World Cups to Australia and India respectively.

West Indies had dominated the game from the late 1970s through to the 1990s, winning the first two World Cups and terrorising batsmen with a seemingly endless supply of world-class pace bowlers.

However, a fall from grace in all formats had seen them not lift a major trophy since ninth-wicket pair Courtney Browne and Ian Bradshaw added 71 to beat England in the 2004 Champions Trophy final, and this comeback was of a similar magnitude.

Darren Sammy's men looked likely to be on the wrong end of a hammering as Sri Lanka's new-ball bowlers applied vice-like pressure, which proved too much for the usually unflappable Gayle.

West Indies are the only team to win the World Cup, World T20 and Champions Trophy outright. India also have their name on all three titles, but shared the 2002 Champions Trophy with Sri Lanka.

After Johnson Charles was removed by Angelo Mathews in the first over of the match, Gayle was trapped lbw by Ajantha Mendis. The spinner went on to benefit from two poor lbw decisions by Simon Taufel - umpiring his last game before retirement - on the way to figures of 4-12.

But Samuels arrived to dish out some brutal treatment to pace bowler Lasith Malinga, with one enormous straight six carrying high in to the top tier of the R Premadasa Stadium.

He was caught at deep mid-wicket off 18-year-old spinner Akila Dananjaya, but the Windies took 29 from the final 17 balls of the innings as skipper Sammy finished unbeaten on 26 from 15 deliveries.

Even then, Sri Lanka looked well placed, only for the Windies to gather more momentum when Ravi Rampaul produced a beautiful delivery to bowl Tillakaratne Dilshan for a duck.

The hosts were able to turn to the experience of Kumar Sangakkara and Mahela Jayawardene but, even though the captains past and present were able to compile a stand of 42, the required run-rate was always rising.

With the spin of Samuels and Sunil Narine slowing the scoring, Sangakkara eventually dragged Samuel Badree to Kieron Pollard at deep mid-wicket.

Mathews departed quickly before Jayawardene, who had twice been dropped in the deep, buckled under the mounting task, top-edging a reverse sweep off Narine to Sammy.

That began a collapse that saw Sri Lanka lose four wickets for nine runs and, although Nuwan Kulasekara showed some late fight, West Indies' triumph was sealed when Malinga was caught at long on off Narine, who finished with devastating figures of 3-9.

The Windies came together to dance on the square in celebration, celebrations that seemed unlikely before the intervention of the brilliant Samuels.