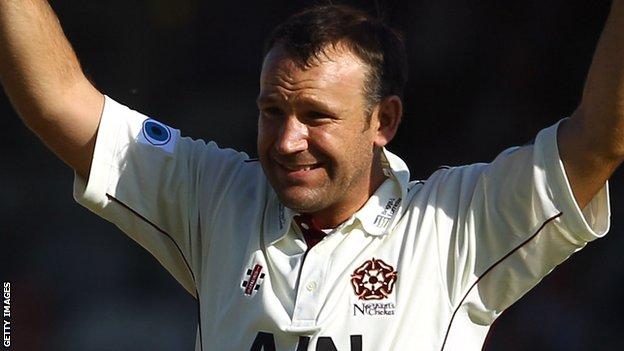 Middlebrook, 35, was named the club's Player of the Year after scoring 714 runs and taking 24 wickets in County Championship Division Two.

He has signed a new two-year deal, while 25-year-old Evans has agreed new a one-year contract.

"It's very nice to have signed, knowing the club appreciates my efforts as a player," said Middlebrook.

Evans, who made his comeback from a long spell out injured to take 12 wickets in matches against Hampshire and Gloucestershire, is one of only four seam bowlers in the squad after the departures of Jack Brooks and Chaminda Vaas.

He said: "[It has been] a frustrating time for me over the last two seasons.

"It was such a thrill to have taken wickets in the Championship matches I played this year and I'm hungry for more next year."

Head coach David Ripley said he was delighted to have both players available for next year.

"I am very pleased that James' consistency has been rewarded.

"His all round game seems to be growing each year and he is the kind of senior player every dressing room wants," he added.

"Luke had an outstanding end to the season and we are all looking forward to him building on that, with the obvious attributes he has to become a top-class bowler."