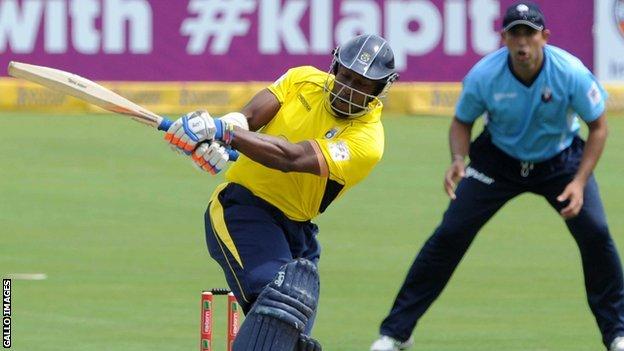 Hampshire bowed out of the Champions League T20 competition after losing their first qualifying match in South Africa against Auckland Aces.

Jimmy Adams, Shahid Afridi and Dimitri Mascarenhas failed to score, all three falling to Azhar Mahmood, who claimed figures of 5-24 for Auckland.

The New Zealand side easily sealed an eight-wicket victory as Mahmood blasted 55 not out in their total of 123-2.

Pakistan all-rounder Afridi, who played for Hampshire in 2011, was back in their side after missing this summer's FL t20 competition because of visa problems.

However, he lasted only four balls before he was caught by a diving Andre Adams for his fifth duck in his last 10 innings in all formats of cricket.

By contrast, compatriot Mahmood's 55 came off only 31 deliveries, while Martin Guptill also added 38 as Auckland cruised to their target in 14.3 overs.

Only the winners of qualifying pool one advance into the main competition and Auckland, who defeated Pakistan's Sialkot Stallions by six wickets on Tuesday, are guaranteed top spot.

Hampshire play Sialkot in their final qualifying match, a dead-rubber, in Johannesburg on Thursday.