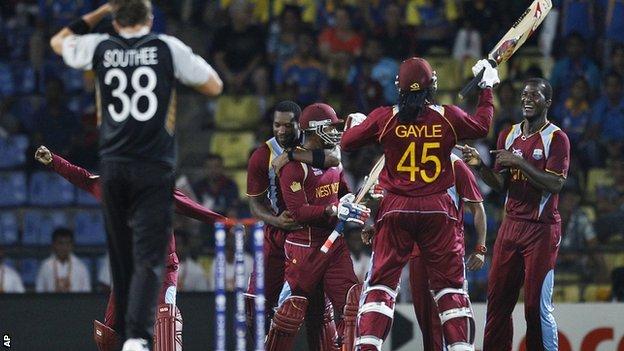 West Indies claimed a super over win to send New Zealand out of the World T20 and reached the semi-finals thanks to England's defeat by Sri Lanka.

After the Kiwis took 17 from their over, Chris Gayle and Marlon Samuels each hit Tim Southee for six to get home with a ball to spare.

Earlier, New Zealand were unable to get past the Windies' 139 all out.

What is a super over?

England could have knocked out the Windies on net run-rate, but the 19-run loss to the hosts sent them home.

A New Zealand win could have left England with the possibility of progressing even if they lost to Sri Lanka, but West Indies' dramatic victory simplified the equation.

Though they were without a victory in the Super Eights before their meeting with Darren Sammy's men, New Zealand could have still gone through had they won in Pallekele.

However, after also losing to Sri Lanka in a super over earlier in the tournament, the Black Caps were again beaten in an eliminator.

"We probably should have won it in normal time, but credit to West Indies."

Just as in the defeat by Sri Lanka, Southee was unable to produce the economical spell he bowled earlier in the match, with his first delivery in the super over a no ball that Gayle hit over long off for six.

From there West Indies always looked likely to get over the line and Samuels, who also bowled the super over, whipped a full toss over the leg side to seal victory.

"We backed Gayle, Samuels and Kieron Pollard to score what ever New Zealand got," Sammy told BBC Sport. "It was brilliant for the game of cricket, but not too good on the nerves."

Not so super in the super over

Before this year's World T20, New Zealand had been involved in two of the three T20 internationals to be decided on super overs and won them both, they have now lost their last two

Samuels' winning blow completed a remarkable turnaround for the Windies, who had earlier collapsed from 60-2 at the end of the powerplay to 139 all out.

The dismissal of Gayle, caught behind off Southee for a 14-ball 30, sparked the slump, as New Zealand's spinners choked West Indies' middle order.

Left-armer Ronnie Hira, in for the injured Daniel Vettori, and Nathan McCullum picked up 3-43 runs in their combined eight overs before Southee and Doug Bracewell returned to mop up the tail.

New Zealand knew victory in 19.4 overs or faster would put West Indies out and leave England needing to beat Sri Lanka, but they were immediately stifled on a slow wicket.

When Martin Guptill fell at the end of the ninth over, the Kiwis had stumbled to 52-3 having found the boundary only five times.

They were rescued by Taylor's unbeaten 62, but were still struggling at the hands of Sunil Narine.

The spinner conceded only three singles from the penultimate over of the Black Caps' chase, leaving New Zealand 14 to win from the final set of six.

Taylor flicked Samuels over fine leg for six, but lost the strike to leave Doug Bracewell needing two from the last ball of the match.

He could only manage a single and, though Taylor took 12 from the last three balls of New Zealand's super over, Gayle and Samuels had the final word.