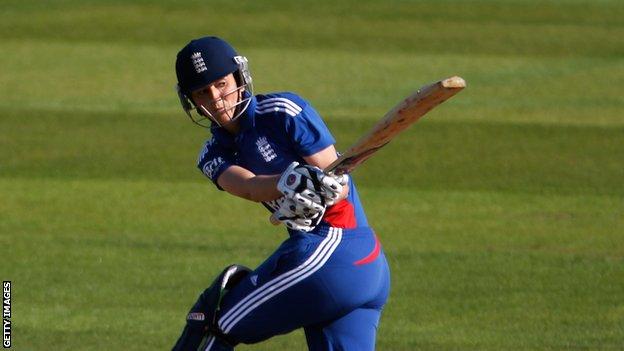 Charlotte Edwards became the first player to score 1,500 runs in women's Twenty20 history as England reached the semi-finals of the World T20 with a nine-wicket victory over India.

"We bowled well to restrict a good Indian side," said Edwards. "We also batted well and Laura and I were pleased to make a positive start."

Earlier, Australia beat Pakistan by 25 runs in a rain-affected game.

England, who play the Aussies in their final Group A game on Monday, were dominant against India - racing to victory with almost three overs to spare.

They restricted India to 116-6, with Marsh also taking two wickets to complete a fine all-round performance.

"We've come into this tournament fully prepared and all of us have been training really hard," added Edwards.

"We bat right down the order and back all our team in these conditions.

"I didn't know about the record. I scored 1000 runs last season, so to score 500 more feels good, but more importantly it is coming in a winning cause, which matters the most."

Australia's win over Pakistan, which puts them into the last four, was led by Jess Cameron, who scored 42 off 28 balls and shared a 67-run partnership with Lisa Sthalekar.

The defending champions ended on 146-5 and Pakistan's hopes of putting up a fight were dealt a blow in the first over when captain Sana Mir was caught by Ellyse Perry.

The wickets of Qanita Jalil and Nahida Khan soon followed to put Pakistan into deeper trouble, before the arrival of rain caused the game to be abandoned.

Pakistan finished on 38-3 off nine overs - 25 runs behind the Duckworth/Lewis par score.