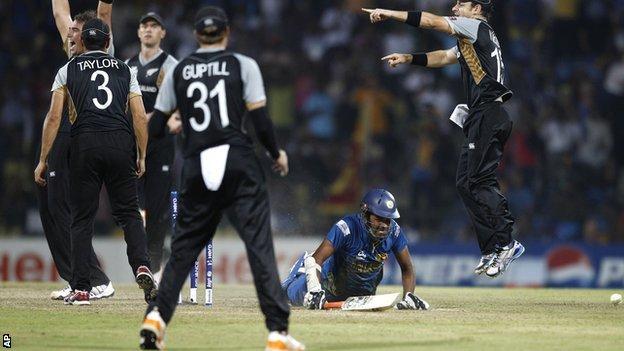 Sri Lanka held their nerve to claim a thrilling five-run super-over win against New Zealand in the first Super Eight match of the World Twenty20.

With New Zealand needing 14 from their one over to win, Sri Lanka pace bowler Lasith Malinga conceded only eight.

What is a super over?

The hosts needed one from the final ball, but Lahiru Thirimanne was run out to force the super over decider.

Batting first in the eliminator, Sri Lanka opted against opening with Tillakaratne Dilshan, who had previously plundered 76 from 53 balls, and failed to find the boundary.

But, crucially, Tim Southee, the New Zealand paceman who had bowled so well at the death to help force the super over, bowled a wide Sri Lanka were also able to run on, before the final, extra ball of the over yielded three for Thisara Perera.

Those five runs proved the difference as the Black Caps also failed to find the boundary, their fate effectively sealed when Martin Guptill was caught at long-off from the penultimate delivery.

It was a spectacular way to begin the second phase of a tournament that had previously failed to ignite during a group stage blighted by one-sided contests, poor scheduling and bad weather.

At various stages in the match, both sides could have justifiably claimed to have the upper hand, with Sri Lanka finally seeming to have taken complete control when Dilshan was at the crease.

All over in the super over

Of the four Twenty20 international to have been decided by a super over, New Zealand have been involved in three. The loss to Sri Lanka was their first defeat.

He shared an opening stand of 80 with Mahela Jayawardene, but after the Sri Lanka skipper was caught at fine leg and Kumar Sangakkara was run out, the host nation wobbled to allow New Zealand back in.

Dilshan was run out in the penultimate over, but Sri Lanka still looked to be favourites when they required only eight from the final six balls.

Southee, who earlier bore the brunt of the Dilshan-Jayawardene assault, returned to bowl with great accuracy at a consistently full length, but was flicked for four by Thirimanne to leave Sri Lanka needing only one from the final delivery.

New Zealand's fielders converged and as, the ball went to point, Thirimanne dived for his ground at the non-striker's end. The batsman was well short, with Ross Taylor apparently having broken the stumps with his hands.

The players shook hands on the assumption that Sri Lanka had won, but numerous replays showed that Taylor had actually deflected the ball onto the stumps, running out Thirimanne and forcing the super over.

New Zealand's death bowling replicated the effort of the Sri Lankans, who had restricted the Black Caps to what looked like a manageable score on a flat Pallekele wicket.

Who is Akila Dananjaya?

Akila Dananjaya was spotted bowling in the nets by Sri Lanka captain Mahela Jayawardene. The 18-year-old was fast-tracked through the Sri Lankan Premier League to the national team. His World T20 bow was only his seventh game of professional cricket.

Akila Dananjaya, the 18-year-old spinner making his first appearance in the tournament after being spotted in the nets by Jayawardene, put the breaks on by having Rob Nicol caught in the deep for 58.

That began a sequence that saw the Kiwis lose five wickets for 41 runs in the final five overs, a slide that looked to be decisive when Dilshan and Jayawardene raced out of the blocks.

Sri Lanka were able to eventually claw their way to victory, but only in the most dramatic circumstances after New Zealand's spirited fightback.