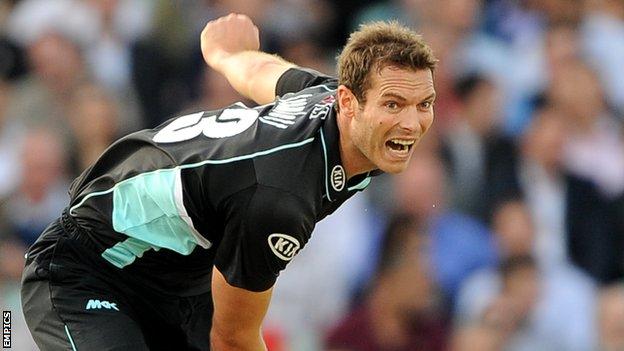 The 31-year-old, who has played 11 Test matches for England, had back surgery in February and recently underwent an operation on his knee.

He told BBC London 94.9: "I am very keen to get back out there and almost start a new chapter in my career.

"It's been a very frustrating time. I still feel I've got a lot to offer at Surrey and hopefully again with England at some point."

He added: "In the meantime, it's about working hard and getting my body in the best shape possible."

Tremlett returned to action in June after surgery on a bulging disc and played six Twenty20 matches for Surrey but was restricted to just one appearance in the County Championship.

Earlier this month, the former Hampshire player had an operation to repair torn knee cartilage.

"It's been one of those years but I am trying to move on and take the positives," he continued.

"I've got the operations done and now I'm in a position to work hard on my rehabilitation.

"I feel in quite good shape even though I've had these problems.

"It's a case of getting strong, building for the winter and hopefully playing cricket at some point."

Tremlett, who has not played for England since the first Test against Pakistan in January when his back problems forced him out of the remainder of the tour, has not been awarded a central contract for the 2013 season.

Although he would love to return to international duty, Tremlett says his priority is to perform well for Surrey next season.

He said: "I'm frustrated to lose my central contract but it almost gives me an incentive to try and win that back. It's a case of getting myself fit and doing my training.

"At the forefront of my mind will be taking wickets for Surrey and hopefully the England stuff will come from there.

"If it doesn't, I'm delighted just to be playing cricket."