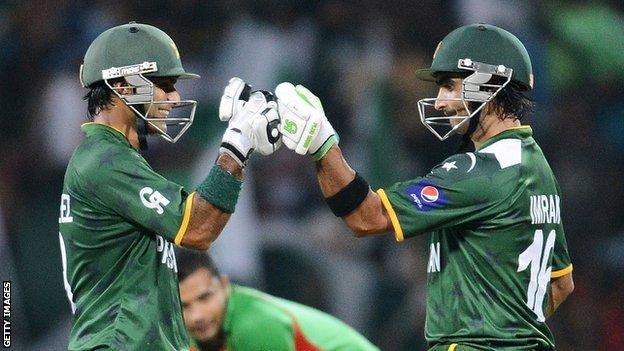 Pakistan easily chased down a daunting target to beat Bangladesh by eight wickets and surge into the Super Eights of the World Twenty20.

Needing a 36-run win to progress at Pakistan's expense, Bangladesh were given hope by Shakib Al Hasan's brilliant 84 in a total of 175-6.

But Imran Nazir (72) and Mohammad Hafeez (45) put on 124 for the first wicket to set Pakistan on their way.

Nasir Jamshed and Kamran Akmal wrapped up victory with eight balls to spare.

Pakistan's triumph rounded off the group stage of the tournament and booked them a spot in a Super Eight pool that also comprises fellow group winners Australia, India and South Africa.

England, New Zealand, Sri Lanka and West Indies make up the other group, with the top two teams in each progressing to the semi-finals.

Pakistan will be eyeing a place in the last four after a dominant batting display in which Nazir blasted the fastest fifty of the tournament - off 25 balls - and Jamshed followed up his half-century against New Zealand with 29 not out off 24.

However, they will be concerned about an erratic display from a bowling attack which boasts the three highest wicket-takers in Twenty20 international history in Saeed Ajmal, Umar Gul and Shahid Afridi.

The normally imperious Gul was alarmingly wayward, giving up 43 runs in three overs, Hafeez conceded 28 from three, and the wicketless Ajmal allowed 32 from four.

"There are still a number of areas that we could improve on," added Whatmore. "It's a work in progress all the time."

As poor as the Pakistan bowling was, Bangladesh deserve credit for a positive approach after they won the toss, with Tamim Iqbal and Mohammad Ashraful putting on 34 for the first wicket in 3.2 overs.

Shakib maintained the offensive in a superb display of controlled aggression. Targeting the gaps in the field, he hit 13 boundaries, including a six over deep mid-wicket immediately followed by a slash for four over point off the out-of sorts Gul.

"They'll be happy at ICC HQ that the top eight teams have qualified; the most threatening of all the associate nations were Afghanistan against India. Pakistan look in fine fettle and Pallekele looks a nice venue - there should be some terrific cricket here and lots of runs."

Captain Mushfiqur Rahim leant support with 25 off 26 balls, although he was granted a huge let-off when Tanvir Sohail inexplicably dropped the simplest of catches at mid-wicket.

When Mushfiqur and Mahmadullah were dismissed in quick succession, Pakistan seemed to be wrestling back the initiative but Shakib hammered three fours off Gul's third over to ensure Bangladesh's total did justice to his scintillating innings.

With Pakistan needing 140 to qualify and knock Bangladesh out, the Tigers needed to start as well with the ball as they did with the bat.

They almost took a wicket with the first delivery of the innings when Hafeez edged just past the fingertips of a wide slip.

An even better chance arrived at the start of the second over when Abul Hasan failed to hold on to a miscue from Nazir above his head at mid-on.

Reprieved, the Pakistan openers began to find the boundary with ease to stamp out any chance of falling short of qualification.

After sharing the highest partnership of the tournament, Nazir and Hafeez fell in quick succession to give Bangladesh a glimmer of hope, but Jamshed and Kamran ruthlessly finished the job with an unbroken stand of 52 from 28 balls.

Mushfiqir told BBC Sport: "We batted well and would have taken 176, but we missed a couple of chances. If we took those chances it probably could have been better."