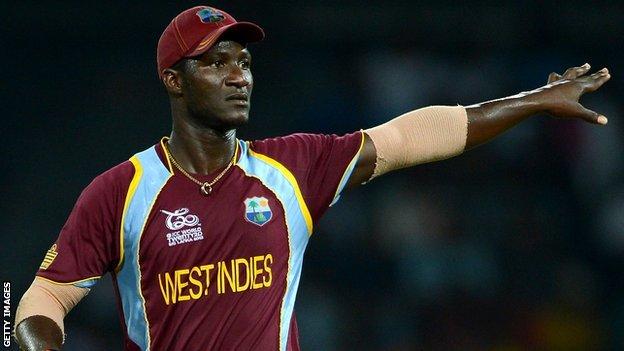 Hopefully, when we go back home, all the Caribbean fans can come and meet us at the airport like they did in 2004

West Indies knocked out Ireland to reach this stage and all-rounder Sammy told BBC Sport: "I'm quite confident that we can go all the way in this tournament.

"When we left the Caribbean, we left with one goal - to win the World T20."

In West Indies' first fixture in Sri Lanka they fell to a 17-run defeat to Australia in a rain-affected Duckworth/Lewis result, before beating Ireland on Monday in another match that fell victim to the weather.

Sammy is unconcerned his side have yet to complete a full 40-over game, saying: "We believe once we play to our full potential we are going to be unbeatable.

"We've not yet played a full game, but that's similar to England back in the Caribbean [in 2010] where they didn't win a game in the group stages, then went on to win the cup."

The West Indies captain, 28, admitted his side have failed to shine in recent major tournaments, but pledged to try to reverse the trend at the World T20.

"It's been a while since we had any silverware, since [the ICC Champions Trophy in] 2004. We'll take it a game at a time.

"Hopefully, when we go back home, all the Caribbean fans can come and meet us at the airport like they did in 2004."