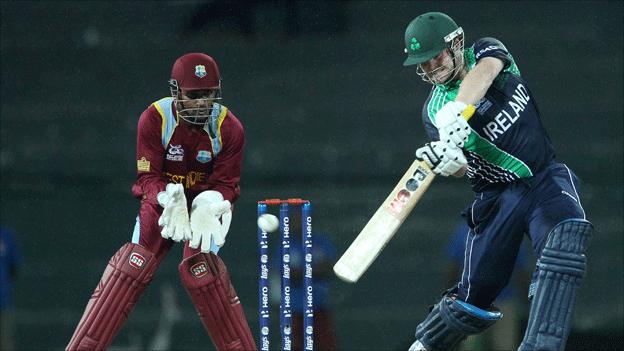 Ireland captain William Porterfield has expressed disappointment after the abandonment of his side's match against the West Indies saw them crash out of the World Twenty20 in Colombo.

"It's disappointing to finish our campaign with a match ruined by rain," said Porterfield, whose side made 129-6 off 19 overs before the abandonment.

"It could've been interesting if we had managed to get a few early wickets.

"It would've been nice to have had the chance to show more of what we can do."

He added: "To play a game of this kind in a stop-start manner is difficult but we managed to gain a bit of momentum in the latter half of our innings.

"Unfortunately you have to play well throughout when you are facing this quality of opposition.

"We had 12 good days of preparation to acclimatise before the competition, but our poor start in our first match against Australia was probably most disappointing - we let ourselves down there."

Porterfield added that the impending loss of bowler Boyd Rankin would leave a "big hole" in the Irish attack.

Rankin has decided to quit Ireland duty in the hope of earning an England call-up.

"It is a pity to lose one of our main wicket-taking bowlers as they are so important at this level," lamented Porterfield.