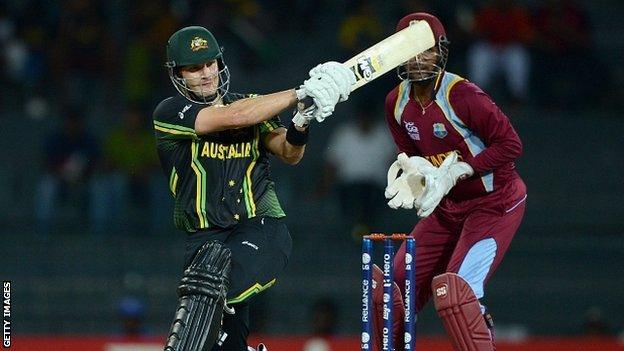 Australia are through to the Super Eight phase of the World Twenty20 thanks to a 17-run Duckworth/Lewis victory over West Indies.

Half-centuries from Chris Gayle and Marlon Samuels powered the Windies to 191-8 after a slow start.

But poor bowling, and big hitting from David Warner and Shane Watson (41 not out) helped Australia surge to 100-1 off 9.1 overs when rain ended play.

The West Indies will play Ireland on Monday for the second qualifying spot.

"There was some good stuff and there was some very ordinary stuff as well," said Australian captain George Bailey.

"The challenge is to lessen the gap between the good and the ordinary stuff. We did do that in patches, but there were certainly patches when they got away from us."

Bailey's opposite number Darren Sammy reflected that, "The batsmen did what was required of them. We knew Australia would come back hard, and we took too long to respond."

The heavy Colombo rain denied spectators what could have been the most exciting finish of the tournament so far.

With nine wickets in hand, Australia were undoubtedly favourites, but with 92 runs still needed off 65 balls the contest was very much alive.

In reality, the Windies bowlers should have made things harder for Australia but they served up far too many easy pickings in the early overs.

Warner smashed four boundaries in the second over of the innings, bowled by Ravi Rampaul, and had raced to 28 off 14 balls when he was caught behind off Fidel Edwards.

The batsman took a long time to accept the decision, with replays inconclusive over whether the ball took the edge.

Starved of the strike, Watson took some time to get his score moving before finding his range against the spinners.

Spinner Sunil Narine was punished for a no-ball as Watson dispatched a free hit into the stands, and then helped himself to four straight boundaries off Samuels, the third of which slipped through Dwayne Smith's hands at square leg and over the boundary.

Mike Hussey feasted off some loose bowling from Windies skipper Darren Sammy to reach 28 not out off 19 balls, and when the rain came, Australia were comfortably ahead of the Duckworth/Lewis par score.

The Windies' ropey performance with the ball was in stark contrast to a showing of considerable authority with the bat.

After a shaky start in which Mitchell Starc clean bowled Dwayne Smith and only 11 runs were scored off the first three overs, Gayle got his team motoring with some fearsome hitting.

He was dropped by Watson at third man on four but made the most of his let-off by striking 18 off his next six balls.

Four sixes were to follow as the left-hander treated the crowd to his full repertoire of shots, each delivered with the minimum of footwork and the maximum of power.

He brought up his fifty off 26 balls, but was reined in by a tight over from Starc before getting out caught and bowled by Watson off a leading edge.

Samuels, a prolific run-scorer against England in their Test series in May, picked up where Gayle left off with a splendid fifty of his own which included back-to-back maximums off Watson.

Dwayne Bravo (27), Kieron Pollard (10) and Darren Sammy (12) all weighed in with quick runs as the Windies, despite losing regular wickets, kept up the momentum right to the end.

Impressive though the Windies total was, it did not prove enough to down the Australians, and Sammy's men will need to beat Ireland on Monday to guarantee a spot in the last eight.