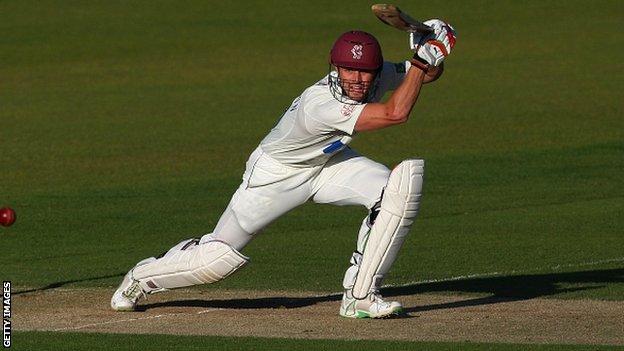 England newcomers Nick Compton and Joe Root were among the winners at the Professional Cricketers' Association end-of-season awards in Battersea.

Somerset's Compton, 29, the only English batsman to score 1,000 runs in the Championship, averaged 99 for the season and won the Player of the Year.

Yorkshire's Root, 21, also included in the Test squad to tour India, was named Young Player of the Year.

Ian Bell collected the prize for England's Most Valuable Player.

The 30-year-old batsman was announced as the winner of the MVP earlier this week, having compiled five fifties in Tests and four fifties and one century in one-day internationals against West Indies, Australia and South Africa this summer.

Bell was also one of five players from County Championship winners Warwickshire named in the Team of the Year.

Previous Players of the Year

Alastair Cook, who added the leadership of the Test team to his role as one-day captain following the retirement of Andrew Strauss last month, won ODI Player of the Summer after guiding England to the top of the rankings.

The 27-year-old left-hander presided over series victories against West Indies and Australia, plus a 2-2 draw with South Africa, and scored 340 runs in 11 matches at an average of 34, with two half centuries and a top score of 112.

With Stuart Broad in Sri Lanka captaining England in the ICC World Twenty20, Strauss collected the paceman's prize as Test Player of the Summer.

Broad, 26, played in five Tests against the West Indies and South Africa, taking a total of 25 wickets at an average of 29.6.

The ceremony featured a video tribute to Surrey batsman Tom Maynard, who died in June.