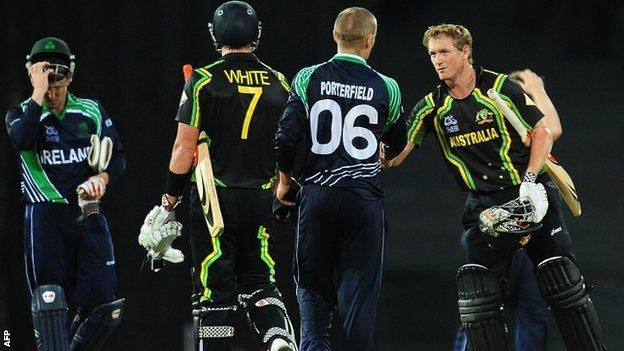 Ireland captain William Porterfield said his side paid for a bad start in their ICC World Twenty20 opener in Colombo as they suffered a seven-wicket defeat by Australia.

Porterfield was out first ball in the Irish innings as the Aussies easily chased down Ireland's 123-7.

"Losing those four wickets pretty early, we started on the back foot," said the Ireland captain.

"We needed a good start to set up a platform for ourselves."

Porterfield's own dismissal in the first ball of the match saw him caught at fine-leg after attempting to hook a short delivery from man of the match Shane Watson.

A certain amount of panic appeared to grip the Irish batsmen early on with Paul Stirling and Ed Joyce also both holing when attempting risky shots.

"Ireland looked nervous at the start when Porterfield was out first ball. Looking at their two games, with West Indies such a strong side in T20 cricket, this was the game that Ireland felt there might have been a chance, but Australia have coasted to victory."

Porterfield agreed that a more measured approach by the Irish in the early stages might have represented a better strategy.

"We have played enough Twenty20 cricket to know that we should be giving ourselves a bit more time," added the Irish captain.

"There are still 120 balls and you can give yourself those few balls to get in.

"That probably cost us those 40 or 50 runs that would have made it a very, very good game."

Porterfield was happier with Ireland's effort in the field as they took three wickets before Cameron White and captain George Bailey steered the Aussies past the paltry target.

"We kept fighting and got a couple of wickets as well so I can't fault the lads for that."

Porterfield added that he would now be hoping for an Australian victory in Saturday's next Group B clash against the West Indies.

"We can (regroup for our game against the West Indies on Monday). We've got four days and hopefully Australia can do us a favour and the West Indies game will come down to a play-off (for qualification)."

Australia captain Bailey was delighted with his team's performance and heaped praise on man of the match Watson who took 3-26 before firing a rapid 51.

"We started really well. Shane Watson led the charge with the ball and finished it off with the bat. He's a complete cricketer," added Bailey.

"The starts are so important for Twenty20. He's bowling the first over and opening the batting and setting the tone for us. He was outstanding today."