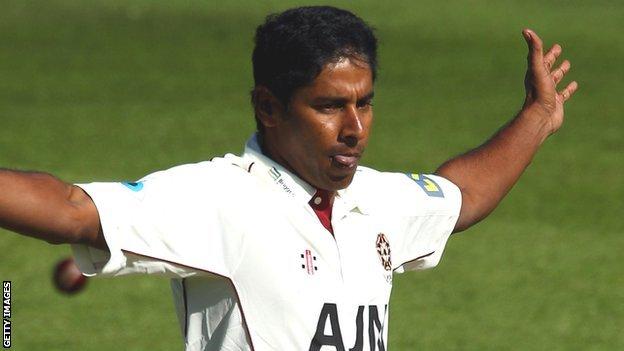 Northants have decided not to offer former Sri Lanka Test star Chaminda Vaas a contract for next season.

The 38-year-old swing bowler has been with the club for the past three years and was player of the year in 2011.

However, he was restricted to only six championship appearances this summer because of injury problems.

"He has just not been able to beat the injuries this year. A real gentleman of cricket, we wish him all the very best," said head coach David Ripley.

"He has contributed a great deal to Northants cricket during his time here, but I would also pay tribute to his standing in the international list of greats."

Unfortunately a third season at Wantage Road - at the age of 38 - proved a bridge too far for the popular Sri Lankan.

Northants will need to think carefully about their pace bowling strength for 2013 with Vaas, Jack Brooks and David Burton all leaving the club.

It looks as though at least one additional player - possibly an all-rounder - will be targeted.

Left-armer Vaas played 111 Tests, 322 one-dayers and six Twenty20 matches for Sri Lanka, taking 761 wickets in all forms of the game before bringing his international career to an end in 2009.

He also appeared in county cricket for Hampshire, Worcestershire and Middlesex.

The 2011 season was the highlight of his spell with Northants as he picked up 70 wickets at an average of 21.4 and scored 400 runs, but they missed out on promotion on the final day.