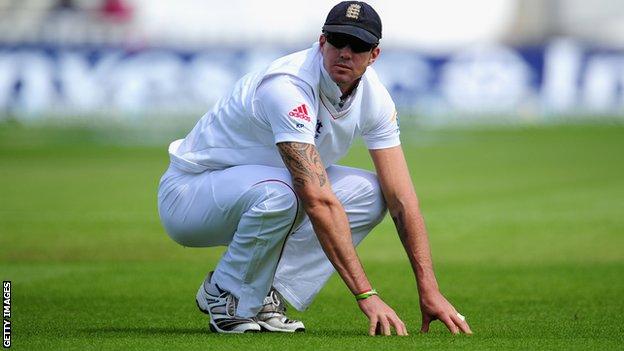 It was no great shock to see Kevin Pietersen left out of the squad for the India Test series after his much-publicised issues with the England and Wales Cricket Board.

He was dropped in August for sending "provocative" text messages to South Africa players and I understand that right up until Monday night both parties were trying to resolve the problems, but the fact that Kevin has not been selected confirms there is still work to be done.

I know Kevin is desperate to get back playing again for England and I just hope that the issues that have arisen are eventually cleared up so that England are then able to pick their very best players for all forms of the game.

Once the healing process has taken place, I would hope KP will be accepted back into the dressing room and any anti-KP factions within the team have been broken up.

Player power in any dressing room must never be allowed to rule and must be quashed by the true leaders - the coach and captain.

Outside work you can pick and choose who you wish to socialise with, but during working hours you have to find a way of getting on with people. In my career, there were always players who did not get on, but it is part of the skill of the leaders to get everyone performing for the good of the team.

We all know that the loss of Pietersen weakens the England team alarmingly but his absence, as well as that of former captain Andrew Strauss, has given opportunities to a couple of uncapped players with plenty of potential.

Yorkshire opener Joe Root is not a player I have seen a huge amount of, but I was speaking to Graham Thorpe about him on Tuesday and once again he was extremely enthusiastic about the 21-year-old opener.

As England Lions batting coach, Thorpe has worked with him closely and has seen him develop. He knows he is not the finished article but he has no hesitation in saying that this lad will be a successful international cricketer.

"I will be at Stamford Bridge on Wednesday night to see Chelsea kick-off their Champions League defence against Juventus. No side has ever defended the trophy but records are there to be broken. Didier Drogba has left but overall the squad is stronger than the one that won it last year so, being totally biased in my assessments, I have high hopes!"

Root has been involved in the England development programmes for a number of years, so he is as prepared as he can be for international cricket. But at the same time nothing can quite prepare you for Test cricket until you've sampled everything that it brings, from the quality of the cricket to the media scrutiny you come under and the public expectation.

He will have dreamt about walking out to bat in his first Test for years and he is bound to be nervous, but it is so important that he has self-belief in his own game. He has been selected to replace Strauss at the top of the order and he should take that as a huge compliment.

The other new face in the England squad is Nick Compton, who fully deserves his call-up after a fantastic season for Somerset. The England squad is often described as a closed shop - they say it is harder to get into the side than it is to get out of it - but through sheer weight of runs for Somerset, Compton has earned the right to be selected.

From what I have seen of him, he may be one of those players whose technique and mindset suits international cricket better than county cricket. He puts a high price on his wicket, bats time, and when he gets in he stays in. All those attributes should stand him in good stead in the Test arena.

Compton is likely to be competing with Jonny Bairstow and Eoin Morgan for a place in the middle order at either five or six.

Morgan's recall may surprise a few people, but the selectors have obviously seen something about him they like. The Dubliner is a quick learner, a special talent and he plays the turning ball well. He struggled badly against Pakistan in the UAE in January and February, but hopefully he has learned from that and will go into India with answers to the many questions that will be asked of him.

He got the nod ahead of James Taylor, who did not quite do enough to cement his place in the two Tests he played against South Africa.

"It was extremely sad to see the Daily Star's chief sports writer Brian Woolnough pass away after a brave fight against bowel cancer. I first met him during my playing career and always enjoyed our conversations on all matters of sport. He will be greatly missed."

Taylor is only 22 and I am sure his time will come again. Very few players go straight into Test cricket and hit the ground running, but he need only to look at Jonny Bairstow and how he came back in the final Test of the summer at Lord's after struggling in his first three Tests against the West Indies to see that the door is never closed.

Last week I gave my backing to Craig Kieswetter as the reserve wicketkeeper and it did come as a bit of a surprise to me to see him not make the squad after what he has done for Somerset and for England in the limited-overs game. But once the selectors decided to include seven batsmen and three spinners there was never going to be room for a spare keeper.

Jonny Bairstow keeps wicket regularly for Yorkshire and is still learning his trade. He has a lot of work to do with Bruce French to make sure he is ready should Matt Prior be injured or fall ill on the morning of a Test.

Finally, England have given themselves plenty of options in the bowling department and they are unlikely to decide on the balance of the side until they have seen the pitches in India.

Samit Patel's selection is crucial because he could potentially bat at seven with Prior at six to allow them to play an extra bowler. One man who could well be used is Monty Panesar, who remains the second best spinner in the country and very rarely lets his team down when the pitches offer turn.