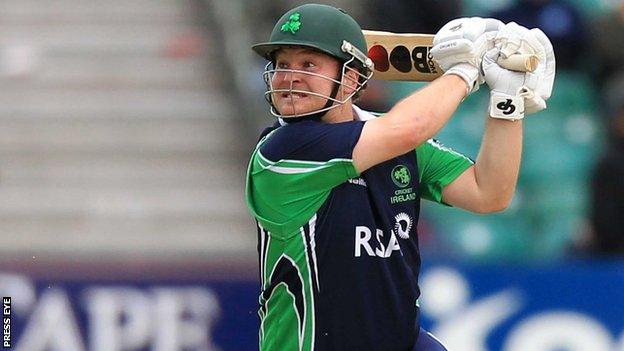 Ireland were involved in another last ball finish as they beat Bangladesh in their final warm-up game before the ICC World Twenty20 begins on Tuesday.

Bangladesh needed 10 runs off the last over in Sri Lanka, but managed only four with two wickets falling.

Middlesex batsman Paul Stirling was the game's top scorer, hitting five sixes in his 71 off 42 deliveries, to help Ireland to 164-6 from their 20 overs.

Ireland meet Australia in their first group game in Colombo on Wednesday.

Having seen off Zimbabwe last weekend, William Porterfield's side will be in confident mood after this win over higher class opposition.

Stirling's salvo was the highlight of the Irish innings, but Ed Joyce chipped in with a more considered 39 to boost the total further and, despite a knock of 52 from Shakib Al Hasan, Bangladesh were unable to reach their target.

The occasional spin of Kevin O'Brien (3-24) eventually put the skids on their charge, which originally looked as though it would be in pursuit of a higher score when Ireland rattled off 40 runs in the first four overs.

Porterfield was the first man to go as he was run out with the score on 46, with Stirling and Joyce then sharing a second-wicket stand of 64 before Stirling was bowled by Elias Sunny.

Joyce carried on the charge before being snared by Mashrafe Mortaza who ended with two for 33.

Bangladesh's response saw them lose Mohammad Ashraful early on for seven, before a quickfire stand of 63 between Tamim Iqbal and Shakib got them moving.

Tamim (35) offered a return catch to Alex Cusack and then Shakib lost his wicket to Nigel Jones as the wheels started to come off.

O'Brien then took three wickets in two overs to really put Ireland in command and, although Ziaur Rahman weighed in with a breezy 26, it was not enough and Bangladesh ended just short on 159-9.