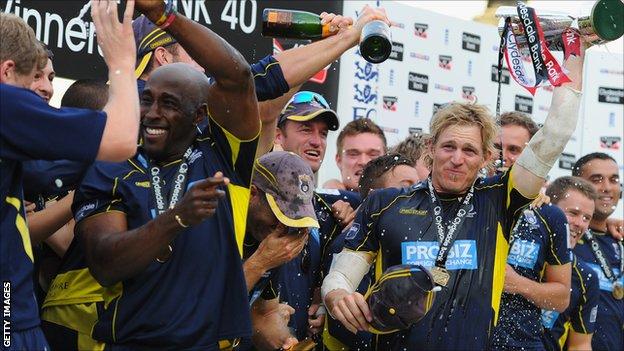 Hampshire chairman Rod Bransgrove called Saturday's dramatic CB40 victory over Warwickshire the proudest day of his tenure in charge of the club.

Hampshire won the one-day double after sealing victory with the final ball of the game at Lord's.

Saturday's victory, the 13th domestic title in their history, was the first time they have won a one-day double.

It was achieved by virtue of losing fewer wickets after Neil Carter's failure to score a single off the last ball left the scores tied.

"We did it the Hampshire way and left it right down to the last ball," added Bransgrove.

"Those guys have given every last bead of sweat to win the game. Right up until the last ball the result was unknown, but they stuck to their task manfully and deserved to win the double."

Hampshire, who held their annual awards dinner on Sunday night, have the added bonus of competing in the Champions League, courtesy of their Twenty20 victory.

In Hampshire's pre-qualifying group in South Africa are New Zealand side Auckland Aces and Pakistan outfit Sialkot Stallions. The group winners go through to the Champions League proper.

But Bransgrove says the whole team deserve recognition for their achievements and he also believes the team can continue to build on the success of this season.

"I've lost count of how many trophies we have won over the past seven years. We're quite used to playing in finals and that helps the players and they keep their nerve right to the end," continued Bransgrove.

"But we did it. We stuck to our game and we've won two cups this season in a season where we set ourselves no particular targets. This is a great club, it's a great place to be and we are going places."