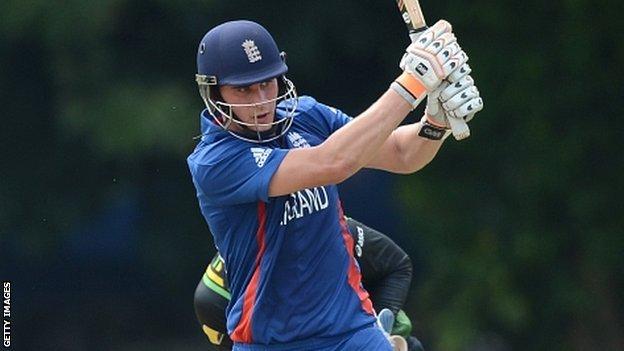 England beat Australia by nine runs in a warm-up match in Colombo for the World Twenty20, starting on Tuesday.

Mike Hussey looked like he might lead his side to victory but he was dismissed for 71 in the 17th over and Australia finished on 163-6.

2007: Lost all three matches in Super Eight stage and were knocked out

2009: Won one and lost two in Super Eight stage and were knocked out

2010: Beat Australia in the final to win their first-ever ICC limited overs trophy

It was England's fifth successive win over Australia this year after a 4-0 one-day series victory in the summer.

England have another warm-up match against Pakistan on Wednesday before their tournament opener against Afghanistan on Friday.

Nottinghamshire batsman Hales got England off to a solid start while Luke Wright (35) and Eoin Morgan (30) also weighed in at the top of the order.

Aussie opener Shane Watson made 37 in reply and put on 74 with Hussey, who hit Hampshire spinner Danny Briggs for three consecutive sixes and hit five sixes in all.

But England skipper Stuart Broad dismissed Hussey lbw and the Australia lower order were not able to maintain the momentum.

"It's a great way to start the warm-up to this tournament, and we also had that good win against South Africa in Birmingham last week," said Hales.

"It's nice to get some runs under your belt in the first warm-up game," he added. "It is a very different challenge to what we're used to in England, but I think the deck was a lot better than everyone expected.

"It came on to the bat nicely, but I think 170 was a pretty good score out there."