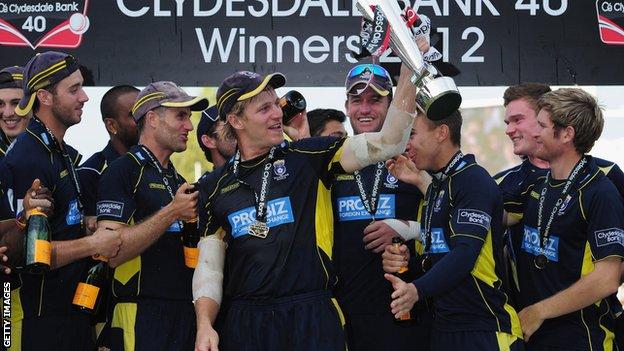 Hampshire sealed a limited-overs double with a thrilling win over Warwickshire in the CB40 final at Lord's.

The FLt20 champions won by virtue of losing fewer wickets after Neil Carter's failure to score a single off the last ball left the scores tied.

Hampshire made 244-5 batting first, Jimmy Adams making 66, while Sean Ervine weighed in with 57 off 55 balls.

Ian Bell's 81 kept Warwickshire in the hunt but Kabir Ali's dot ball at the death left the Bears on 244-7.

It was a magnificent end to a season severely disrupted by bad weather, but not the way Carter would have wished to bow out in his final game for county champions Warwickshire.

The left-hander's cover-driven boundary off Kabir's penultimate delivery had made the Bears favourites to win.

After lengthy deliberations over his field placings, Hampshire skipper Adams could only trust to fortune as the former England paceman began his run-up again.

But, playing against the county he represented as a boy, Birmingham-born Kabir produced a yorker-length delivery just outside off stump which proved too quick for Carter, who was unable to get his bat down on it.

That meant Hampshire had scraped home in the tightest finish in a Lord's final since Derbyshire beat Northants by losing fewer wickets in the 1981 NatWest Trophy.

The game began with a flurry of boundaries from Hampshire openers Michael Carberry (35) and James Vince (18) but they were gradually pegged back, Warwickshire spinners Jeetan Patel and Ian Blackwell bowling a full complement of eight overs each.

Adams batted well but, when he dragged a wide ball from Chris Woakes into his stumps in the 32nd over, Hampshire needed someone to provide some impetus in the closing overs.

Ervine rose to the challenge in tandem with former Australia Test player Simon Katich (35 not out) and together they added 69 in seven overs as the innings drew to a close.

Warwickshire replied with a half-century partnership between Darren Maddy and Varun Chopra which ended when the latter was caught off Chris Wood, whose 3-26 against Yorkshire was crucial to Hampshire's success in last month's T20 final.

Chopra's downfall brought in Bell, who announced his arrival at the crease with a couple of crisp boundaries.

Maddy (35) then pulled a long hop from Liam Dawson straight to deep mid-wicket, but the Warwickshire innings really stuttered when Tim Ambrose and captain Jim Troughton were out in successive overs to leave them on 144-4.

And, when Bell was caught on the boundary edge for 81, having once again kept up his record of scoring at least a half century in a Lord's final, it looked like Warwickshire were down and out.

Woakes had other ideas, collecting four boundaries in his unbeaten 24 off 16 balls.

But, crucially, the England one-day international only faced one delivery in the final over as his team came up agonisingly short - to leave Hampshire celebrating their seventh domestic one-day knockout trophy.

"It hasn't sunk in. Kabir did a great job and the seamers held their nerve and we just snuck over.

"We are missing a few guys but the others came in and made it count.

"It has been a great day's cricket and we're fortunate to come out on the right side of it."

"Sure it was a great game for the neutral. It was so close at the end I thought we had it. I'm very disappointed.

"It wasn't meant to be but we've won the County Championship and we should be very proud of what we have achieved this season."